Few food-related experiences please me more than buying a bag of just-picked satsumas off the back of a pick-up truck on the edge of a pecan orchard in Baldwin County on Christmas week.

Some of the most distinctive icons of nature in the American South – magnolias, camellias, and azaleas come to mind – came over from Asia. Satsuma oranges have Asian origins too and are a part of the mandarin orange family. Mobile and Baldwin Counties on the Alabama Gulf Coast are part of a Southern “Satsuma Belt” that stretches from Texas to Florida and there is pretty specific history about how the tasty fruit got its start in Alabama. The Mobile County town of Satsuma gets its evocative name from the fruit. “Satsuma” ranks right up there with “Sipsey” among my favorite Alabama place names.

Satsumas are a medium-sized, mostly seedless, orange citrus with a distinctive skin that easily pulls away from the fruit, making it simple to peel and eat without much mess or trouble. Satsuma season starts in the fall just before the holidays commence. The fruit gets sweeter as the season progresses and its rich sweetness peaks right around the time Christmas comes around.

I always grab a few bags of satsumas when I am in Baldwin County before Christmas. Last year the weather was uncooperative and satsumas were hard to find. In years past, I usually bought my satsumas from a lady whose truck was often parked on the corner of Fairhope Avenue and Church Street in downtown Fairhope. This year there was a good crop and an abundance of stands, pick-up trucks, and signs on the side of the road alerting the public that there were satsumas to be had. The recent deluge of rain may have put a slightly early end to the season, I hear, but three days before Christmas I saw a man with a tent, a parka, and a large umbrella selling baskets of satsumas during a pounding rainstorm (with distant thunder) on a Fairhope side street.

While satsumas are a tasty treat to just peel and eat, I also usually make an ambrosia with satsumas as the citrus component. This year, between frequent visits to the hospital, my mother and I only had time to grab a satsuma in lieu of a meal on a few occasions. Mother would usually pack a couple of satsumas in her bag of provisions before a day spent by my father’s bedside but just as often she would give them away to a nurse or respiratory therapist.

I had to get to Huntsville to take care of some end of month duties at the house and the satsuma rations at Mother’s house in Birmingham were getting low when I left. Fortunately, in Huntsville today, I saw a sign advertising “Mobile County Satsumas” outside a store and dashed in to grab the last two bags they had for the season.

That should get us into a new year, perhaps into an ambrosia, and tide us over for a few days until the next crop of satsumas makes its appearance before Thanksgiving of 2016.

On my last day in Point Clear I was awakened early by a tornado warning. I walked out onto my balcony to watch the storm system move from Mobile over the bay to the Eastern Shore. The wind picked up; the ancient live oaks around the lagoon shook fiercely as a single white ibis took flight from the water, startling white against the dark grey clouds. The storm was clearly moving to the north of me, toward Daphne and Spanish Fort. Most of the worst of the weather system had moved still farther to the north when I pulled away from the resort a few hours later and began to drive toward ominous skies.

I finagled an abbreviated version of my annual pre-Christmas retreat to the Grand Hotel in Point Clear on Mobile Bay this year despite plenty of concern; my calls back and forth to Mother and the hospital were frequent. 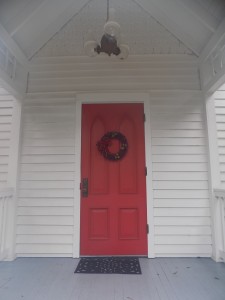 It was a shortened stay with welcome warm temperatures (despite the less than ideal weather threat) and I was able to find time to do some of the things that make this annual holiday season visit so essential to my mental well-being. Shortly after arrival on Sunday afternoon it was time to meet a contingent of the Brunson family for afternoon tea in the Grand lobby. The holiday crowd was large and festive. We adjourned from the Grand to Allison and Richard Brunson’s inviting bayside home where their oldest son John had been inspired to make a Chicago-style deep dish pizza which was savory, rich, and delicious and which seemed to exceed everybody’s positive expectations – including John’s and the brothers who assisted him. At least four other pizzas in delicious combinations were baked to accompany John’s masterpiece and we all overindulged – except for family friend Kenneth who sensibly made a salad for himself from unused pizza toppings.

On Monday, time was spent resting and reading, walking around the grounds, and exploring Fairhope and environs in search of fresh satsumas, a juicy citrus that makes its appearance in Baldwin County right around Christmas and may often be found in my New Year’s Day ambrosia. A massage was scheduled for Tuesday and it was a pleasure to catch up with Judy at the front desk; the massage therapist, Claudia; and the wonderful attendants in the quiet room, J.C. and Al. All of them provide a comforting and stress-free escape from the tension beyond the spa’s peaceful walls.

My good friend Kitty from graduate school and, later, from professional theatre gigs, was visiting with her family in Spanish Fort and met me for dinner in Fairhope on my final night. Dragonfly foodbar was the destination as we savored foodsmith Doug Kerr and staff’s always creative concoctions.

On that drizzling final morning before the trip back to Birmingham, I swung by Punta Clara Candy Kitchen to grab the requisite pralines.

St. Francis on the Point church sits across the road from Punta Clara Kitchen and the Wash House restaurant. Leaving Punta Clara, there was a sign in front of the tiny St. Francis chapel that said “CHAPEL OPEN FOR PRAYER.” I have photographed that chapel many times and have used it on my annual Christmas card but the doors have always been locked on those previous visits. I have tried to photograph the interior through the windows in the past so it was a treat this time to be able to go and sit quietly inside.

The warm and peaceful chapel provided meditation, shelter, and comfort from the various storms I faced on the drive home to Birmingham and, later, farther north to Huntsville and my house north of the Tennessee River. I was grateful for all the people who are “lifting us up” as my family faces the day to day of serious illness. “Lifting up” is my friend Judy Prince’s phrase for prayer.

As I compose this, I am sitting once again in my father’s Birmingham hospital room looking across Shades Valley at the foggy but brightly lit visage of Vulcan standing sentry over this valley and downtown Birmingham beyond Red Mountain. I will still be sitting here in a few minutes when midnight comes and it is Christmas Day. Somehow, with Dad sleeping peacefully at the moment, the twinkling lights of Homewood in the distance, and the stained glass windows of a church down below, this seems a good refuge to sit out the remains of a Christmas Eve. I will be here still when the sun of a fresh Christmas morning glimmers over the mountain to the east.

Merry Christmas. May you find comfort and joy with those you love.