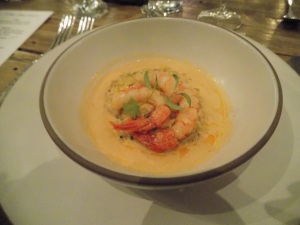 I have often confessed that my least favorite ethnic cuisine is Indian — Asian Indian (curse you, Christopher Columbus). This bias is borne by an aversion to the texture of much Indian food served in American restaurants, which all too often tastes and looks like baby food to my eye and palate. Also, and probably most importantly, since the 1980s I have often been dragged to Indian restaurants by people I didn’t particularly like. Personal and cultural prejudices are often odd things to pinpoint.

Having once again made my confession, I confess further that I have always enjoyed the blends of spices and ingredients of Indian cuisine. I vividly remember a vendor distributing samples of her Indian foods on the grounds of the New Orleans Jazz and Heritage Festival in 1983; I hypnotically followed her back to her tent to savor more.

But, then, people and mediocrity muddled my perceptions.

A couple of years ago, Chef Asha Gomez and fabulous food inspirations from her birthplace in southern India and her adopted home of the American South made me once again and seriously rethink my reaction to Indian cuisine. This revelation came, not surprisingly, at a Friends of the Café event at the Alabama Chanin factory in Florence – the source of many of my recent food-related revelations (www.alabamachanin.com).

More recently, I have been reading Kevin Alexander’s new book, Burn the Ice: The American Culinary Revolution and Its End (Penguin Press, 2019), and one of my favorite threads in this wonderfully readable narrative is the story of Anjan and Emily Mitra and the evolution of their San Francisco restaurant DOSA and beyond (www.dosasf.com). Their effort to fight the stereotypes of Indian food with authentic and heartfelt cuisine makes me long for what I have obviously been missing.

Now, last week, Chef Cheetie Kumar – born in India, filtered through the Bronx, and the chef/owner of Raleigh’s Garland (www.garlandraleigh.com) — sealed the deal for me with an enthusiastically complex five-course meal at the most recent Friends of the Café dinner in Florence. My hesitation about authentic Indian cuisine has mostly been eradicated as of last week. Kumar’s Florence menu was not exclusively Indian, but the Indian details and techniques were a compelling presence throughout the evening.

I am being converted to a finer appreciation of Indian cuisine.

The August edition of the Friends of the Café events tends to be particularly frenetic since it occurs as a sort of preamble to fashion designer Billy Reid’s “Shindig,” a weekend of music, food, and fashion throughout the Shoals community.

The Friends of the Café events are always fund-raisers, often for Southern Foodways Alliance. John Paul White (www.johnpaulwhite.com), a talented musician on the Shoals-based Single Lock Records roster (www.singlelock.com), performed soulfully and authentically before and after the meal. The loquacious Eric Solomon of European Cellars, who curated the wines with Chef Kumar, spoke often and at length about his pairings.

Chef Kumar, who did not appear until after the memorable five-course meal was complete, was the star of the evening. Her dishes were complex but not complicated, beginning with the three passed appetizers that circulated through the café and designer’s show room as the guests assembled. Puffy profiteroles with hot honey and a smoked fish dip with pickled shallot on rye toast were among the appetizers, but I kept leaning in for a bite of the curry leaf polenta with spicy tomato chutney.

When the diners were seated, the diversity of flavor profiles continued to blend and surprise. At my table were Kelly Fields, the James Beard Award-winning Outstanding Pastry Chef of 2019, and her thoughtful sous chef from Willa Jean, a great place I discovered a couple of years ago in New Orleans (www.willajean.com). They were in town to prepare a course for a meal at one of Muscle Shoals’ legendary sound studios on Saturday night of Shindig. It was enlightening to eavesdrop on my tablemates’ expert analyses of each dish as it was presented.

The first seated course was a watermelon and peanut chaat followed by coconut-poached royal red shrimp, creamed corn and tapioca pudding, with Bengali five spice. The third course consisted of a memorable Punjabi grilled summer squash casserole with soft paneer cheese and a fragrant roasted tomato vinaigrette. I think that third dish was my favorite in an evening full of lovely tastes – mainly for the inventive, flavorful, and unexpected use of the summer squash.

Kumar, a self-taught chef, is also the guitarist for the rock band, Birds of Avalon. I haven’t heard Birds of Avalon yet, but I will attest to Cheetie Kumar’s rock stardom in the kitchen. The meal she presented was thoughtful and imaginative, with diverse and balanced ingredients. It was a meal that will be remembered.

The Friends of the Café dinner series continues to provide an enlightening food education and the introduction to a splendid array of food artists and artisans – both in the kitchen and as fellow guests at the table.