At the end of February, as friends and I left a late performance at Louisville’s Kentucky International Convention Center, we were stunned by the appearance of a bright red cardinal, trapped in the gigantic convention hall. He was clearly in panic, flying frantically back and forth along the massive third floor concourse where, as far as we could tell, there were no clear openings to the outside. Others gathered to watch the bird in frenetic flight. All of us cheered him on.

At dinner the next night, other friends spoke of seeing a female cardinal trying to find an escape from the same place the next morning.

Cardinals, you know, mate for life.

I find myself worrying about those desperate cardinals each morning when I awaken. I hope they found escape; I worry that they did not.

Tradition from many cultures tells us that a cardinal sighting is the visitation of the spirit of a loved one, letting us know that we are being heard and watched over.

At the time, my friends and I didn’t suspect that the theatre convention would be our last opportunity to be around people, business, and social events for who knows how long.

I find comfort, as always, in nature and the circle of life.

At my father’s graveside service after the funeral four years ago, one of my most distinct memories is the abundance of wisteria vines in full glory in the trees just beyond his gravesite. Today, as I drove through Alabama, I was stunned by the transient presence of wisteria wherever I gazed.

Today, at home, my Japanese pink cherry tree is starting its annual bloom. My neighbor’s white blossomed cherry is reaching its peak, and my crimson camellia, at last, has yielded a respectable bounty after two years. My grandfather’s legacy rose is thriving, as is the wild rose I harvested from a friend’s lakeside ten years ago. My redbud is stagnant, while redbuds bloom in profusion everywhere I look; this is its habit and I will trust it to sprout its heart-shaped leaves before long. 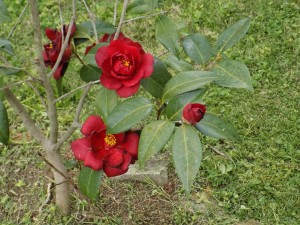 I’m afraid I tend to be a pessimist by nature. That increases my personal stress and tension in times such as these. I find myself drawn to less exuberant literature of my past. In these times, two titles that keep creeping into my consciousness are Love in the Time of Cholera by Gabriel Garcia Marquez and Death in Venice by Thomas Mann. I re-read Death in Venice on my first extended visit into New Orleans after the Flood; it calmed and strengthened me.

I heard a recent interview with poet Reginald Dwayne Betts; he spoke of how the current crisis is making him more aware of nature. He comments that on a walk with his son, “I heard the sound of a squirrel’s claws as he climbed a tree – as stressful as this time is, it gives us time to reflect.”

When Alexander Pope wrote “Hope springs eternal in the human breast” in 1732, I have no doubt his specific choice of verb was intentional.

At dusk a couple of days ago, as I drove along the crest of Shades Mountain, two cardinals – a male and a female – flew up out of the sunset from the ridge and directly into my path. I braked, but they were already clear. The pair skimmed the surface and flew into the darkening woods. I watched them fly up through the trees and disappear. 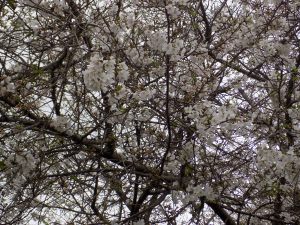