Summer 2018 went out on a hot note, with September temperatures lingering in the ‘90s and not a lot of rain recently in my parts of the South – despite the hurricane devastation in the Carolinas. The heat does not bother me; the last days of summer are the sweetest because it’s almost gone. I always lament the things I didn’t do to take advantage of the longer summer days.

This year, I didn’t sit in my back yard much and that’s a loss.

I measure the progress of the warmest months by the fruit that comes and goes. Strawberries appear in April and are disappearing by the time the first Chilton County peaches arrive around Mother’s Day. Blueberries and blackberries come soon after, with local watermelons and cantaloupes appearing near Independence Day.

Figs come around a little later. The fig tree yield has been iffy in recent years. Even though I heard a grocery clerk bragging to a neighbor about the bounty on his family’s fig tree, I didn’t see a lot of fig action at the various farmers’ markets. 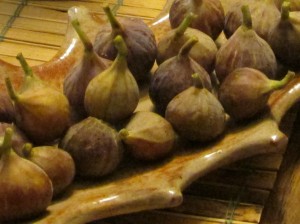 I have often written about the community that comes together at the special dinners at the Alabama Chanin Factory in Florence. It has enabled me to meet people I might have never known.

In the years that I have been attending the benefit dinners in Florence, two gentlemen were among the most regular attendees. We did not actually meet them until we were seated at a table together earlier this year. They are Milton and David, a father and son from Corinth, Mississippi, who regularly make the trip to Alabama Chanin’s factory for the singular dinner series that happens in that place.

On that first meeting, Milton, the father, entertained us with stories of the historical research he and his late wife, Stephanie, have done in and around Corinth, his hometown. He also mentioned, in passing, the fig trees on their property – collected over the years of their marriage and annually producing a nice harvest. My friend, Anne, was particularly interested in acquiring a fig tree for her house and Milton shared a recommended source, www.ediblelandscaping.com.

At the end of the most recent Florence dinner in August, Milton handed me a small jar labeled “Stephanie Sandy’s Figs.” Inside were “Milton’s North Carolina Style Whole Fig Honey-Lemon Amaretto Preserves.” I saved the jar for the last days of summer and ate the delectable fig preserves with some of my favorite local Humble Heart goat cheese and a piece of Mrs. London’s bread, another favorite from local farmers’ markets. The combination was delicious; it tasted exactly like the last days of summer should.

In the last week of summer, when I got home from work on a late afternoon, a deer was calmly grazing across the railroad tracks behind my house. I got out of the car and watched him. It’s rare to see a deer out in the open in the hottest part of a hot day. I normally only spot them behind my house at night. This daytime deer stopped grazing and looked back at me for a moment. Then, he slowly disappeared into the cool of the trees. It has been so dry here for the past few weeks, I suspect he had gotten bold in search of food and water.

On the morning of the last full day of summer, I woke before sunrise to the sound of rain against the windowpanes. By the time I got up and looked out the window, it had stopped. As I packed my car, I noticed single drops of water hanging on each of the berries of a backyard shrub. They seemed to be a token of a summer passing away and a promise of new seasons to come.

That evening, on the last full day of summer in Birmingham, it was hot and dry with clouds worthy of a biblical Renaissance landscape floating overhead. The neighborhood ice cream shop in Bluff Park atop Shades Mountain was packed to overflowing with people gathered in the parking lot and on benches outside the little shop. Suddenly, from one of the overlooks along Shades Crest Road, the sky turned pink and gold and the setting sun shone bright orange across Oxmoor Valley. I had left my camera at the house, but stopped to savor the display.

The next day, just after the Alabama game, I drove back up the mountain with camera in tow to see if I might catch a repeat of the previous day’s stunner. But fall had arrived; the sky was grey and overcast and the setting sun was a dingy circle partly visible through ominous clouds. On the other side of the mountain, an almost full moon peeked through more clouds in a still and colorless dusk.

The cotton fields – which are still abundant between Decatur and Florence, Alabama – were peaking and startlingly beautiful with their fluffy and practical white yield as my friend  Anne and I made our way to the Alabama Chanin factory and the last dinner of the 2017 season (www.alabamachanin.com).

It was in this in-between area, around the community of Trinity, that I was one of many volunteers that helped out for a morning or a day with Alabama Chanin and Billy Reid’s 2012 experiment in growing organic cotton in north Alabama. With the industrialization and outsourcing of cotton harvesting, working the field was a “back to the roots” experience which helped me to recognize and honor the hard work of my own relatives who worked the cotton fields and harvests of their own Alabama farms in the first half of the twentieth century.

Inventive souls are finding new uses for local cotton these days, including downtown Birmingham’s Redmont Distillery which features an “Alabama Cotton Gin,” a spirit which is “distilled through Alabama cotton” and infused with other local product (www.redmontdistilling.com).

The most recent Alabama Chanin dinner was a celebration of the fall harvest, helmed by Ray Nichols, the new in-house chef for the Café at the Factory, who comes with an already impressive resume and who, before joining Alabama Chanin, was at Odette, a charming dining spot in downtown Florence. It was a rich season of Friends of the Café meals starting with Chef Scott Peacock re-emerging for an Easter season event and moving forward with the return of Chef Ashley Christensen for her second meal of the series. In August, in conjunction with the Billy Reid Shindig, Chef Asha Gomez presented a meal combining her American Southern experiences with her roots in southern India.

Chef Nichols’s dinner was a sold-out mix of locals, regulars, and new faces. Our friend Carol from Chicago showed up accompanied by a charming Chicago friend. We met guests from Hawaii and Colorado and a yoga master from Gray Bear Lodge in nearby Hohenwald, Tennessee. I have written before that there are times when the former tee-shirt factory in the industrial section of Florence seems like the center of the universe; chance meetings and serendipity abound.

Young Chef Nichols impressively held his own with his predecessors with a hearty dinner featuring the harvest of the region along with a couple of tasty imports, like Conway Cup oysters from Prince Edward Island. The mildly briny oyster was topped with a Harvest Roots kimchi from Mentone, a scenic village on Lookout Mountain in northeast Alabama. The oysters on the half shell were pass-arounds at the start of the evening along with deviled eggs topped with a Harvest Roots curtido.

The pre-dinner beverage was served in a brown sugar-rimmed glass partially filled with cider from Florence’s Singin’ River Brewery. The cider was cut with Prosecco and the drink was finished with a splash of Sangria.

When the guests were seated and the preliminary introductions were completed, platters of smoked chicken wings, pickled vegetables, and toasts topped with Bonnie Blue goat cheese were served family-style. The chicken was coated with a white sauce (this is, after all, north Alabama), and the goat cheese was from Waynesboro, Tennessee, just off the Natchez Trace. 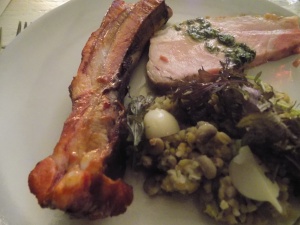 A harvest salad with an abundance of greens and local harvest from area farms was served next with a burnt honey–sweet potato dressing. The main course featured Bear Creek pork served two ways. A large and tasty pork rib was presented alongside a ham steak. Both were accompanied by farro verde, turnips, and muscadine.

The dessert lived up to its preamble. A crumbly sweet potato cake and a creamy semolina pudding were garnished with cashews and citrus.

Ray Nichols’s debut for an Alabama Chanin factory special dinner was a triumph with every bite, heralding a bright new presence in the Factory kitchen that will maintain and enhance an already impressive standard.

The yoga master asked me at some point during the evening if I spent my time going from one amazing dining experience to another. I wish … but no, I do not. Such evenings are few and far between in my schedule and each is anticipated with pleasure. I feel rejuvenated and ready to face the day to day challenges when I have the opportunity to eat an amazing meal in a singular place in the company of delightful people.