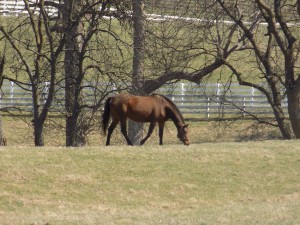 LEXINGTON, KENTUCKY. I am an erstwhile horse racing fan, meaning that I follow the Triple Crown and check in on news about Bob Baffert, my favorite trainer, a few times a year. So I was intrigued to pass Man o’ War Boulevard and Keeneland Race Track as I drove into Lexington, Kentucky, for the first time.

Since 1983 I have regularly attended the annual Southeastern Theatre Conference (SETC) convention in early March. Several thousand students, academics, professionals, amateurs, beleaguered supportive parents, and a little bit of everything else one can find in the theatre and media converge on a conference center and spend five days jamming elevators, food courts, and hotel bars and restaurants as they audition, exhibit, network, perform, and choose from hundreds of panels and workshops.

SETC is the largest theatre conference in the United States. I was pretty fresh and young when I started attending, first as a stage manager for a community theatre production in competition, then as a job hunter, and later as a director and casting associate at the three days of actor “cattle call” auditions. Now, I go as an educator and a member of the Southern Theatre magazine editorial board. 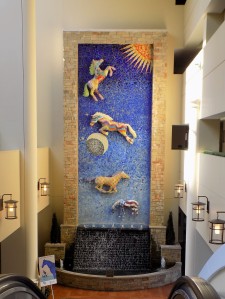 It’s inspiring and invigorating in the first hours but by the time I attended a Friday afternoon editorial meeting there was a delayed response in the room and the sense of overload was palpable on most of the participants. SETC sessions start early in the morning and go until after midnight so it is perhaps a younger person’s game more that it’s mine. Still, I press on, up and down the escalators, past the horse-inspired fountain.

Most of my Kentucky sojourns focus on Louisville so it’s good to check out a new part of the state. The conference begins to wind down by Saturday afternoon so I usually set aside some Saturday time for unwinding and exploration of my own. I arrived in Lexington after a cold front passed through on Wednesday and my Saturday morning post-breakfast walk was a chilly and brisk one. By Saturday afternoon things had warmed up nicely, though. 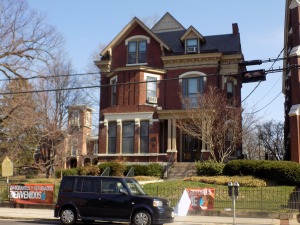 Among the Victorian buildings comprising an area called “The Square” across from the conference center is the visitors center proclaiming Lexington the “Horse Capital of the World.” And, of course, University of Kentucky blue is everywhere. I can see two houses with connections to Mary Todd Lincoln and her family from my hotel room – one of them is next door to Rupp Arena. And I have caught myself humming “My Old Kentucky Home” more than once. 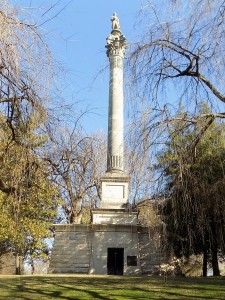 From my hotel window, I spotted a pedestal with a statue atop it. I ventured down Main Street to find that the mystery man on the 120-foot pedestal is “The Great Compromiser” and 19th Century statesman Henry Clay. He and his wife, Lucretia Hart, lie beneath the imposing monument in the dignified old Lexington Cemetery.

Because of the demands of the conference, many meals are grabbed on the run. A few years ago, however, my friends Janet and Russell and I started meeting for a relaxing dinner on Saturday night of the conference. I have known them since I lived in Jackson, Mississippi, and we always have a lot of catching up to do. More recently, my friends Kitty and Patty – both of whom go back to my graduate school years in Tuscaloosa – joined the crew.

Since I don’t know Lexington I decided to do a web search of dining near the hotels. I kept coming back to a place called The Village Idiot, which sounded ideal, with a varied and interesting menu to please a variety of tastes. I made a reservation and was a little nervous since it was my first time to book a restaurant for this group before checking it out in advance. 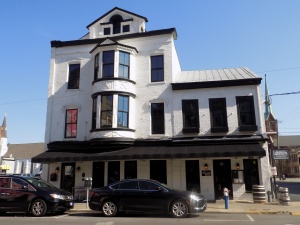 Not to worry. The Village Idiot is a new-ish gastropub in a circa 1825 former post office building. It is a three and a half story structure divided into several cozy bars and dining rooms. The menu is locally sourced and adventuresome and our party was pleased with every bite – starting with a shared artisan cheese plate.

I launched my main meal with a most generous dried fig and country ham “side salad.” Most of us had the New York strip but there was a very tempting pulled pork mac and cheese entrée. I thought seriously about ordering duck and waffles, The Village Idiot’s response to the chicken and waffle entrée that is ubiquitous on Lexington menus.  We finished feasting with a huge bourbon-sauced bread pudding with five spoons so we could share.

“The Purge,” a house drink combining Buffalo Trace, Ancho Reyes chili liqueur, ginger, and lemon was another popular hit at our table.

Head Chef Jason Richey and Chef de Cuisine Eric Angelo have their fingers on a fine balance of taste, variety, freshness, and style. Jeff, our waiter, was knowledgeable, charming, attentive, and eager to share with us “theatre folk” his theatre experiences back in high school.

I was relieved by the end of the dinner when our group declared The Village Idiot a great choice. After an exhausting conference, The Village Idiot was both invigorating and relaxing. We made it an early night since we all had long drives the next morning.

SETC is in Mobile next year. Before the group went our separate ways, we agreed that next year’s Saturday evening dining will be at one of my favorites – The Wash House, across Mobile Bay in Point Clear.

I guess I have a few more conferences left in me before I’m put out to pasture.. 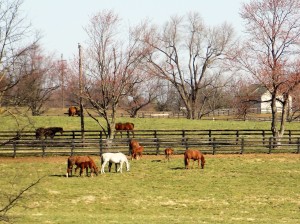