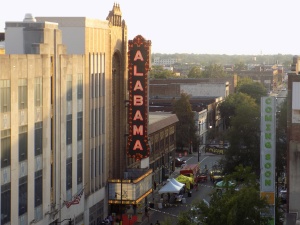 When I arrived in Birmingham on Friday afternoon for the 2016 edition of the Sidewalk Film Festival it never occurred to me that of the eighteen movies I would see over 48 hours, I would drive home on Sunday night most pumped about a documentary that featured performances by high school color guards.

Contemporary Color is directed by Bill Ross IV and Turner Ross, the filmmaking brothers whose 2010 documentary 45365 about nine months in the life of Sidney, Ohio, is still one of my favorite movies to be screened at Sidewalk ever. The Ross Brothers’ latest, Contemporary Color, was conceived and produced by David Byrne, one of my musical heroes, and documents a one-night only event at Brooklyn’s Barclays Center. Byrne invited ten high school color guard units to perform live performances set to original music written especially for the event by contemporary artists including David Byrne, Nelly Furtado, Devonte Hines, How to Dress Well, Lucious, and St. Vincent. Each of the artists performs their compositions along with the color guards live at Barclays.

The Ross Brothers take the live event and turn it into a hypnotic meditation on color guards, interspersing concert footage with individual profiles, backstage glimpses, rehearsal footage, artful segues, and, at one point, the voice of an enthusiastic New Jersey grandfather cheering in the arena. The cinematography, sound, and editing are stunning. Especially powerful are shots of a young color guard performer doing his routine alone in the garage of a house juxtaposed with his powerful performance at the actual event. Contemporary Color is a fierce and brave movie presented without irony. I kept being reminded somehow of Godfrey Reggio’s “Qatsi trilogy” of trance-inducing films scored by Philip Glass that were released between 1983 and 2002.

The thing that can be most frustrating about Sidewalk is also one of the things that I enjoy most about it. Nearly 200 titles of all lengths and genres are presented on ten screens at seven locations on the north side of Birmingham’s city center in a single weekend. With ten or more screenings running simultaneously from early morning to late at night, you must plan carefully to get the full benefit. Even with the most precise planning, one is always going to miss out on something he wanted to or should have seen. That is part of the charm of the event — keep them wanting more.

Contemporary Color was the biggest surprise of the weekend but there was plenty to enjoy and savor; I only walked out of one screening (which shall remain nameless).

A nice little character-driven narrative feature called Little Men, directed by Ira Sachs and screened at the Alabama, was my kick-off to a Saturday full of screenings. Sachs has the restraint to end his film at the exact right moment. Little Men is full of fine performances by grown-ups like Greg Kinnear and Jennifer Ehle but the breakout performance is by a young newcomer – a kid named Michael Barbieri, playing “Tony.” I look forward to seeing more of his work in the future.

My Sunday screenings started off at the newly restored Lyric Theatre with DePalma, a talky documentary about Brian DePalma, one of my personal “guilty pleasure” directors. DePalma, directed by Noah Baumbach and Jake Paltrow, is packed with scenes from DePalma’s classics like Carrie and Dressed to Kill, Scarface and The Untouchables, and a generous sampling of other directors’ movies that influenced the quirky and opinionated DePalma.

Sidewalk brings in motion pictures, audiences, and filmmakers from all over the world but it has always been notably generous in finding room to showcase Alabama filmmakers. I always work some of those screenings into the weekend. Clearly the most popular of the Alabama-centric titles this year was Gip, Patrick Sheehan’s award-winning documentary about gravedigger / blues musician Henry “Gip” Gipson. Gip, who cites his age as “somewhere between 80 and 100,” is the proprietor of the last remaining juke joint in Alabama

Birmingham’s central city core is undergoing a resurgence and that is partially a result of the efforts of Sidewalk at the festival and throughout the year. At opening night, it was announced that the multi-use refurbishment of the old Pizitz department store building (Pizitz was my favorite of the big downtown department stores as a youth) is set to include permanent offices for Sidewalk and two 100-seat movie theatres.  The new development will be “The Pizitz.”

Downtown Birmingham on the final weekend in August is an indie film lover’s paradise, full of memorable characters on the screens and in the streets. I always leave inspired. 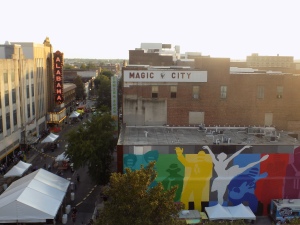