When I was little and living in Tuscaloosa, before the interstate came through, Hamm’s Pottery on Highway 11 just past Cottondale was a magical place on the road to Birmingham. I remember rows and rows of wheel-turned garden pots on the hillside outside the shop and a variety of pots – some made by Mr. Hamm and others mass manufactured – that were sold in the store by the highway.

My Harbison grandparents liked to stop at Hamm’s and I suspect that some of the glazed decorative pottery for houseplants that I now have in my house came from those visits. Over time, Mr. and Mrs. Hamm passed away and a barbecue place named The Pottery Grill took over the location.

Fast forward to my post-college years and I was again living in Tuscaloosa and, influenced by the Kentuck Art Center and its fall festival, I began to take a collector’s interest in art and functional pottery. In every room of my house now, there is pottery to contemplate.

My collection eventually outgrew the tables and shelves on which to display it. Just before I moved into my current house, I came into possession of my grandparents’ dining room table and china cabinet. Mother said she’d give me china to display in the cabinet but I had other ideas and the china cabinet became the home to a good many pieces of pottery.

The first significant pieces of my pottery collection were a couple of “architectural” pots by Timothy Weber (www.tweberpottery.com) when he was based in Tuscaloosa. I lost track of Weber for a while when I was moving around for theatre and he had relocated to Tennessee. More recently, I have caught back up with him at the Kentuck Festival and other galleries around the region and have increased the Weber collection.

Daniel Livingston is a friend from my Tuscaloosa years whose delicate and intricate raku pieces have been added to my collection over the years. During a move, I dropped and broke one of my favorite Livingston pieces but gathered up the delicate shards and lined them around a plant in a flower pot. The piece took on a vibrant second life in that incarnation.

Susan Brown Freeman is still another potter with Tuscaloosa connections who is now based in Birmingham. I bought my first piece of her pottery at the Chimneyville Crafts Festival in Mississippi. Freeman’s deep glazes and intricate designs with delicately rendered reticulation and cutouts are favorites. When I purchased one as a present for my mother, it started her on a decades long habit of buying Freeman’s pieces.

I went through a period of seeking out horsehair pottery – pottery that has horsehair thrown on it during firing, leaving a dark carbon stain on the piece. My two favorite horsehair pieces came from a shop in Seaside on the Florida Gulf coast and from a gallery in Little Rock. 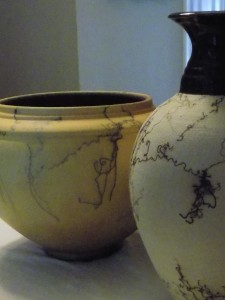 When I lived in southwestern Utah, I acquired pottery pieces that were fired in restored kilns of the ancient Anasazi by late 20th Century Native American potters. A Navajo-style wedding vase with two spouts bridged by a looped handle was a perfect wedding gift.

On theatre gigs and tours, I would pack a piece of my pottery in my luggage. I would unpack and display it in each of the endless series of hotel rooms to keep a connection to home.

On annual trips to Fairhope, I was pleased to discover The Kiln, Susie Bowman’s ceramics gallery and workshop (www.facebook.com/thekilnfairhope). In the early days of The Kiln, I was especially drawn to the pottery by Branan Mercer (www.b-metro.com/brananmercer) and usually bought a piece or two around Christmas. Ocean Springs, Mississippi, is a fairly short drive from Fairhope and its Shearwater Pottery (www.shearwaterpottery.com), started by Peter Anderson of the artistically prolific Anderson family, is an idyllic location along a wooded road perfumed by Gulf breezes. 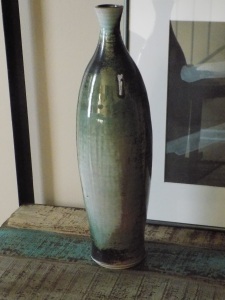 Over the years, my collection has grown with gifts from those who know my predilection. A Sansai Trinity Vase, a three-sided Japanese porcelain vase with Chinese characters, was a gift from Pratt Dean, a former missionary in Japan (www.trinityvase.com). A piece of speckled blue “Cindyware” by my friend Cindy Edwards is displayed near functional pieces by Jerry Brown, the master potter of Hamilton, Alabama, who passed away in 2016 (www.jerrybrownpottery.com). Jerry Brown Pottery is a family operation and Brown’s work was created in close collaboration with his wife, Sandra, and other family members. Brown is best known for his whimsical “face jugs,” which is a form I never warmed up to. I am more drawn to the functional pieces like bacon cookers and corn bread cookers which I own and use regularly.

Miller’s Pottery in Brent, Alabama (www.encyclopediaofalabama.org/article/h-1033) continues a family tradition of stoneware pottery spanning the history of pottery-making in Alabama. The Miller family has a marital connection to the pioneering French LaCoste family of potters around Montrose on Alabama’s Eastern Shore of Mobile Bay, whose kilns date back to around the 1840s. Eric Miller once told me a story about making a set of dinnerware for a relative who, upon receiving it, said, “This is so special, I would never dream of using it.” Mr. Miller sounded almost offended when he explained, “But I make it to be used.” I love the classic lines of Miller’s Pottery and the marks of individuals in the pottery. Eric Miller’s son, Steve, and his cousin, Allen Ham, each bring their own distinctive markings to the classic family designs.

The Alabama artist Frank Fleming passed away in March 2018 (www.bhamnow.com/2018/03/19/frank-fleming). Fleming’s monumental works featuring fantastical animals are found in many public and museum locations throughout the South and nationally. His most notable work is probably “The Storyteller” fountain in Birmingham’s Five Points South district. In my collection, Fleming is represented by a more prosaic miniature porcelain piece of an okra pod and garlic bulb resting on a magnolia leaf.

I have pottery pieces from many places but Alabama-based pottery is core to the collection. A key resource for information about pottery-making in Alabama is Joey Brackner’s comprehensive Alabama Folk Pottery (University of Alabama Press, 2006).

My pottery collecting spans four decades of adding pieces that speak to me in some special way at a given time on my travels. It reflects changes in my tastes over time. Its tactile nature makes it a pleasure to handle and use. Practically every piece evokes an individual story of the maker who sold it to me or the individual who gifted it to me. It is an integral ingredient in making my house my “home.”