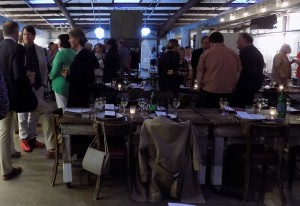 The restorative powers of the Friends of the Café dinners at the Alabama Chanin Factory in Florence are palpable each time I go. At the most recent dinner I attended in March, walking through the factory doors had cathartic impact.

For those who have never visited the Alabama Chanin factory (www.alabamachanin.com) – which is the workplace for the artisans and craftspeople responsible for clothing designer Natalie Chanin’s line of organic hand-crafted clothing and other lifestyle products – the space itself has an instant sense of community and a tonic effect. The aesthetics of the place are in a harmonic balance and the products displayed in the retail area are diverse but somehow all work together. Art works and objects of interest are placed throughout; they are spare and do not overwhelm.

At the March event, the meal was the product of the unpredictable collaboration between Frank Stitt, Birmingham-based chef and restaurateur, and South Carolina pitmaster Rodney Scott. Stitt’s flagship Birmingham restaurant, Highlands Bar and Grill (www.highlandsbarandgrill.com), has been nominated for the James Beard Foundation’s “most outstanding restaurant” award for eight years in a row now. The 2016 winners will be announced in San Francisco at a ceremony on May 2. Scott’s Bar-B-Que (www.thescottsbbq.com) in Hemingway, South Carolina, is legendary among pork barbecue aficionados and gained new  followers when the original cookhouse burned to the ground in 2013 and The Fatback Collective, a project of Southern Foodways Alliance (www.southernfoodways.org), teamed up to sponsor a “Rodney Scott’s Bar-B-Que in Exile Tour” to raise money to get Scott’s home turf back in operation. The “tour” travelled throughout the South, introducing his singular barbecue to an even broader audience.

The combination of Stitt and Scott is an inspired pairing and the resulting meal at The Factory was masterful. Diners were greeted with a “Southern Apertivo Highball” featuring vermouth, Capelleti, citrus, bitters, and Birmingham’s Buffalo Rock Ginger Ale. Pass-around hors d’oeuvres were crudités and a tasty combination of pork rind and pimento cheese.

About twenty minutes before seating for the meal, as the diners assembled, Rodney Scott and Zach Chanin brought in the whole hog and displayed it on a table in the showroom. We all gathered like paparazzi to snap photos and take in the sight and the aromas.

Frank Stitt introduced the meal by saying that Rodney Scott prepared the whole hog while Stitt and staff conceived and prepared the side dishes. Stitt was charmingly persnickety about the correct way to pass dishes at table. Grassroots Wines did the wine pairings with the various courses.

After a beautiful asparagus salad with farm egg, “just dug” potatoes, and ham hock vinaigrette, the abundant second course was served family style. Mr. Scott’s magnificent barbecue pork was accompanied by a turnip gratin, a hearty salad featuring farro and barlotti beans with grilled red onion, and a Brussels sprout slaw with pecorino dressing. I recently told a vegetarian friend that even though pork was featured, she would have had no problem getting her fill from the side dishes. 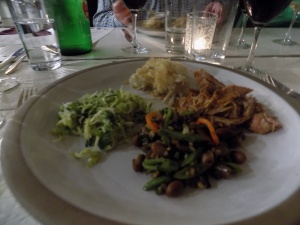 Dessert was Dol’s chocolate bourbon torte with marinated strawberries. “Dol” is Dolester Miles, the pastry chef at Highlands who is also nominated for a James Beard Award this year as outstanding pastry chef. If you have ever eaten one of Ms. Miles’s desserts, you will know that the nomination is highly deserved.

I have written previous essays about the sense of pride and community that permeates events at The Factory. Amazing meals by renowned talents only add to the aura of the place that Natalie Chanin’s singular vision has created. Each time I leave a Factory event, I look forward to the next opportunity to be there.  The next dinner at The Factory will feature in-house chef Zach Chanin. Can’t wait.