I got a brick for Christmas. And it was one of the more meaningful presents I received.

It was a brick from the ruins of the demolished Ensley High School, my father’s alma mater, on Birmingham’s west side. The building held its first classes in 1910 and closed at the end of the 2005-2006 academic year. A fire gutted the abandoned school in 2018 and its final demolition began in 2021 to make way for a multi-use complex.

Grover Journey graduated from Ensley in the early 1950s and was student body vice-president in his senior year. Mother and I always marveled that, wherever we might be, Dad could sniff out an Ensley grad from his era.

Listening to Dad’s stories, I always had the impression that their bitterest high school rivals were in Woodlawn, across the city on the east side of town. The Woodlawn community is having a resurgence these days and Ensley, which went into a rapid decline when its steel mills closed in the ‘70s, is now looking forward to its own renaissance. It has a long way to go. Dad’s boyhood home is one of only two houses still standing on the once crowded block where he grew up and met Mother.

Along with the pink-ish tan exterior brick, my special Christmas gift included a well-worn and annotated copy of Shakespeare’s King Henry the Eighth from what was once a voluminous Ensley High School Library. The card in the book has signatures of withdrawals dating from the 1920s to the 1950s. A student named Charles Ingram checked it out seven times in succession in 1956. My mother also received a brick and a Shakespeare volume and I now worry about the fate of all of the other books from the EHS Library. I’m hoping there is an effort to preserve them.

That precious Ensley High School brick now joins another brick from a long-gone Birmingham landmark. The Tutwiler Hotel, opened in 1914 on Twentieth Street downtown, was the grande dame of the city’s hotels until it closed for good in 1972. It was imploded in 1974. The implosion did not go quite as planned; one part of the building crumbled to the ground – I remember watching it live on television – and another part stayed up and was eventually demolished by more conventional methods.

Not long after the demolition, I made my way through an opening in the fence at the construction site and grabbed a brick as a keepsake of the place. It has now been with me spanning six decades and many moves. In fact, I am looking at it as I write these words. 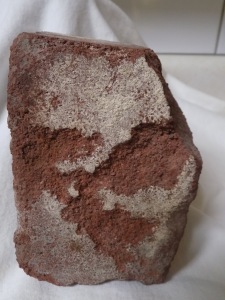 The Ridgely Apartments, near Linn Park and a few blocks from the old Tutwiler, were refurbished and re-christened as the “Tutwiler Hotel” in 1986. The Ridgely building was actually built a year earlier than the original Tutwiler with the involvement of some of the same developers and architects, so I guess it’s a fair enough trade-off if the original had to go. I’ve stayed there a few times, but when somebody tells me they are staying at “the Tutwiler,” I am quick to point out that there was once a grander, “real and original,” Tutwiler.

Preservation efforts in Birmingham have never fully recovered from the loss of Birmingham’s magnificent Terminal Station in a 1969 demolition. The building’s elaborate Beaux-Arts design featured two 130-foot towers and an elaborate dome covered in tile and a decorative glass skylight. Its loss opened eyes, spurred other cities’ preservation efforts, and made Birmingham preservationists more tenacious.

Birmingham’s Southern Research Institute (SR), an affiliate of the University of Alabama at Birmingham (UAB), has dealt a blow to Birmingham preservation with its acquisition of and plans to destroy Quinlan Castle, a medieval-inspired, stone-clad former apartment building on a rise in Birmingham’s Southside, built in 1927.

SR’s CEO, in a sketchy, badly-composed justification of the institute’s decision to demolish the building, describes the proposed bland replacement building as a “castle for the 21st Century.” He also has the bad taste and gall to cite the collapse of the Surfside condo in Miami as a motivating factor for the decision to destroy the castle.

Nobody is fooled. It is clear to anyone who knows that building that it could never have become a research laboratory and I’m not sure why Southern Research has to use that ruse as a justification for the demolition of a historic element of local urban architecture. UAB and Southern Research have the clout to do about anything they care to on the Southside. UAB already blighted part of the Southside skyline by erecting an eyesore – an oversized parking shed that they refer to as the football team’s “practice field.” So I think the big question for many of us now is why the SR expansion has to happen on the Quinlan Castle site.

In 1990, when I was moving to Birmingham to take a theatre job, my apartment hunting began with Quinlan Castle. It was already pretty run-down, and closed a few years later, but the charm of the building was intact and it had mighty potential. The small apartments, which would have been quite snazzy in the Roaring ‘20s, opened onto a central courtyard. There were even cannons in a couple of the turrets along the crenellated roof. It would have been perfect for me as a college student, but I had moved on and opted for a more modern abode up the mountain. Still, the castle gave me a smile each day as I passed it on the way to work.

I went to Quinlan Castle around Christmas, just to see if it is still standing. As of a couple of weeks ago, it’s still there. A part of me hopes that cooler heads have prevailed and that SR is considering other sites for its “21st Century castle” of innocuous sterile labs.

If you’re in the area, go over to 2030 9th Avenue South and pay homage to another endangered part of Birmingham architectural history while it still stands. 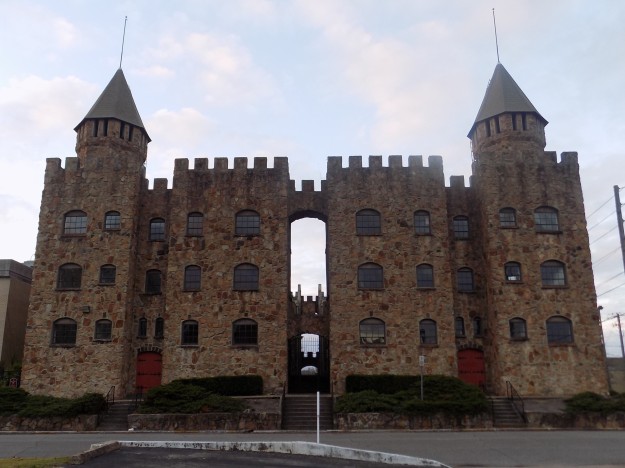