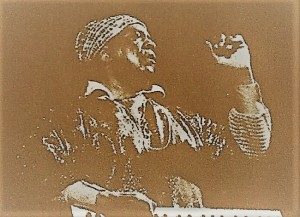 “Calling Planet Earth – I am a different order of being …”

So says Sun Ra in Robert Mugge’s 1980 documentary, “Sun Ra: A Joyful Noise.” I was inspired to view the movie by Richard Brody’s recent spectacular review in the New Yorker, a review that is arguably as thoughtful and well-crafted as Mugge’s film itself.

Mugge’s hand-held cameras sometime follow Sun Ra around in random sequence; sometimes the musician walks ‘round and ‘round the camera. Occasionally, Sun Ra leaves the frame as the camera stops to ponder some detail in the room. In one memorable sequence, the camera is stationary, focused on a cityscape, as Sun Ra walks back and forth, in and out of the camera’s view, giving his thoughts on what is important to him as an artist of the universe.

He has a lot to say. “They say that history repeats itself,” he says, “but history is his story; it is not my story … Nature never repeats itself. Why should I repeat myself?”

Sun Ra was a son of Birmingham. Born Herman Poole (“Sonny”) Blount, he was a prodigious musician at an early age, playing Birmingham clubs. In the 1930s, he spent a year as a music education major at what is now Alabama A&M University.

Somewhere along the way – and the accounts vary – he had a transformative experience that convinced him that he had been transported to the planet Saturn and returned to planet Earth in a space ark to spread a new and forward-looking philosophy to the delusional Earthlings. He legally changed his name to Le Sony’r Ra, began to call his band the “Arkestra,” and the living myth was born. Sun Ra had the privilege of largely creating his own mythology while arguing for a “mythocracy opposed to your theocracy and democracy.”

He is critical of human inhabitants of Earth, arguing that “Man has failed – spiritually, educationally, mentally.” Standing in front of the White House, Sun Ra says that “you can’t have justice if you penalize people for doing wrong and don’t do anything for them if they’re doing right.”

Sun Ra’s philosophy often makes sense and shows an acute wisdom; occasionally, it might seem a little absurd. Either way, one should always watch his eyes. He seems conscious of exactly what he’s doing and saying and playing all the time, no matter how outrageous it may seem in the moment. It has been observed that sometimes Sun Ra felt that too many musicians take themselves too seriously; his music and philosophical observations seem to be both a response to his innate intelligence and a reaction to taking oneself too seriously.

In an early sequence of the film, vocalist June Tyson sings of Sun Ra as “the living myth, the living mystery.” Those words “myth” and “mystery” recur often throughout Mugge’s portrait of the man. Sun Ra is little known outside certain circles, but he retains a devoted following and immense respect among serious jazz aficionados. I was surprised when two novels I read recently featured cameo appearances by Sun Ra.

Mugge’s film does not deal with biography. It is most concerned with Sun Ra’s present, around 1980. Much of the film is shot in Philadelphia environs and clubs and in the communal rowhouse in Philadelphia’s Germantown neighborhood where Sun Ra lived with much of his band – a band that taps into his musical vision and his taste for wild and outlandish garb and adornment that appear to be a fusion of the Space Age, Egyptian Africana, and psychedelics.

When I was first exposed to Sun Ra and his Arkestra’s music, sometime during my college years, I didn’t “get it.” Much of it sounded like untamed cacophony with minimal focus or forethought. Over time, the more I listened and got to know musicians with an interest in jazz, the more I appreciated Sun Ra.

“A Joyful Noise” lends credence to testimony of Sun Ra’s virtuosity. Saxophonist John Gilmore, a long-time member of the Arkestra, comments that he finds Sun Ra’s technique “… ahead of Bird and Monk” and later evokes Charles Mingus, too. Sun Ra’s knowledge of intervals and harmony, he says, are so “highly advanced” that he decided to “stop” and devote his career to the Arkestra. He stayed with Sun Ra from the 1950s. Gilmore led the group after Sun Ra’s death, and until his own death in the ‘90s.

Gilmore is one of many examples of the quality of musician Sun Ra sought and attracted. At one point in the film, Sun Ra states that he chooses musicians who believe in “arkestration, precision, and discipline.” In rehearsals captured by Mugge, Sun Ra is a diligent and precise task-master. His musicians – in rehearsal and performance – show both attention and awe. Sun Ra’s choreographic conducting in performance appears surreal and spontaneous while simultaneously controlled and conscious.

The concerts feel trance-like – in observation of both the musicians and the audience experiencing the music. In his lifetime, Sun Ra was called a “catalyst.” “A catalyst,” he says, “changes everything, but remains the same.”

I don’t always understand Sun Ra and his music, but I always enjoy the effort.

The title of Mugge’s film comes from a story Sun Ra tells in the documentary. When he and members of the Arkestra lived communally in the Philadelphia rowhouse, they would rehearse any time – day or night – that Sun Ra had the urge to create. Once, when the police came to the door in response to a complaint, they told Sun Ra that neighbors had complained about the “music.” He informed them that he wasn’t playing “music” – “I was making a joyful noise – that’s what the Bible said.”

Sun Ra had strokes in his final years and was brought back to Birmingham to be cared for by family members. He died in 1993. I was surprised to learn that he is buried at Elmwood, the 120-year-old Birmingham cemetery where my father is buried. Out of over 130,000 plots at Elmwood, I discovered that Sun Ra happens to be buried in the block just across the way from my father.

Occasionally, I spot license plates in Elmwood from far-flung places with people looking around for something in that vicinity. Occasionally, those people look like forward-thinking musician-types. If they’re looking for Sun Ra, I am happy to point out the place where his Earthly remains are resting. 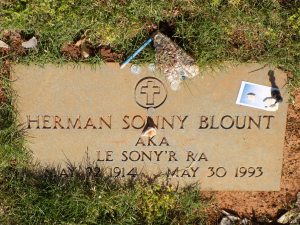