The overly attributed quip, “If you remember the ‘60s, you weren’t really there,” does not apply to me.

I remember the ‘60s very well but I was too young, at the time, to be “really there.” I remember the decade as energetic and often frightening with assassinations, bombings, riots, Vietnam, constant protests, and the birth and maturation of an array of social movements. It was also a time of great music and free-wheeling fashion. It was scary at times, but it was also hopeful with optimism, a desire for change, and a constant moving forward toward an idealistic place that seemed inevitable and just around the bend.

Now, we’re again in challenging times with mercurial instability and megalomania occupying the White House. I cringe with shame and embarrassment for my country at incessant narcissistic White House tweets from a cowardly bully that are mistaken for policy statements. We are in the midst of crises with an ongoing stream of mass shootings, a commander-in-chief who demeans women, environmental disaster, an embattled education system, the complicity of our congress with corrupt insurance companies threatening our health care, a growing racial divide, and a protective executive relationship with  a corrupt, repressive, and murderous Saudi regime. Authoritarian dictators are given respect and deference by a White House that insults our nation’s trusted democratic allies. The NRA has abandoned any lofty Constitutional goals it claimed to espouse and become, instead, an enabler of domestic terrorism.

These days, we seem lacking in the optimism and hope that characterized the ‘60s. Mass protests, which had an impact during the ‘60s and early ‘70s, now seem naïve and pointless in the current environment saturated with meaningless social media. I’m embarrassed when I hear the same tired chants and cheers – even when I agree with the sentiments that inspire them.

In Lanford Wilson’s great play, Fifth of July, June Talley – a former ‘60s activist – tells her daughter, “You’ve no idea the country we almost made for you. The fact that I think it’s all a crock now does not take away from what we almost achieved.”

Later in the play, one of June’s fellow sojourners from the activist days says to that same daughter, “How straight do you have to be to see that nothing is going to come from it? But don’t knock your mother, ’cause she really believed that ‘Power to the People’ song, and that hurts.”

As much as I try to be engaged in progressive change, I grow weary of the constant divide and the shouting from every side. The message with every issue seems to be Either you’re totally with us or you’re against us. There seems to be no acceptable middle zone anymore. Civility, compromise, and diplomacy are forgotten relics in contemporary social discourse. It’s trickling down from the top in our country.

As regular readers of this journal know, I put a good bit of thought into my annual holiday card – trying to find the best reflection of where my life and thoughts are each year when the holidays roll around. I have written in the past about the “brief meditation” of signing and addressing each card and remembering the recipient. My Christmas card this year bears a simple message: “Peace, Be Still.” It’s a quote from the Bible, from the Gospel of Mark’s version of Jesus calming the stormy sea.

I wanted to change up my Christmas card a bit this year. Instead of the exterior scenes I usually use (most often of small country churches), I used an interior from the Cathedral of St. Paul in Birmingham. The cathedral was empty on the Christmas Eve morning when I photographed it last year – a peaceful place to relax and retreat. As I moved around the space, taking photographs, a couple of women arrived to prepare for Christmas Eve mass.

In these times of stress, I seek quiet times and calm – a time to reflect. I try not to add to the raucous din that surrounds me.

At this holiday season, it seems more than ever that everybody needs to take a moment to regroup, to be still – to focus on the positive things in our lives and try to tune out the negativity that bombards us. In doing so, we may be better able to address the adversity and strife that surround us with clear heads and rational responses in the year ahead – a year for which I am reserving a great deal of optimism.

Current challenges may be resolved while new challenges inevitably emerge but we all need to step back and re-energize on occasion. The holidays seem the ideal time to pause and reflect.

May our holidays be happy and peaceful ones. May our new year be a time of hope and progress.

Peace on Earth. “Peace, be still.”

The Cathedral of Saint Paul, Birmingham

In Raymond Carver’s glorious short story, “Cathedral,” a regular guy, stoned and semi-drunk, tries to communicate the actuality of a cathedral to a blind man – a houseguest who is practically a stranger to him. The task is pursued with the seeing man holding a ballpoint pen to paper and the blind man following the movement of the hand and the verticality of the movement.

“You got it, bub. I can tell. You didn’t think you could,” says the blind man. By story’s end, the seeing man is the one who has been enlightened about the majesty and meaning of cathedral architecture.

My ongoing project of photographing old churches is inspired by an interest in ecclesiastical architecture and architecture in general. I am often drawn to the quaint and forgotten small churches found on remote byways but church architecture of all types is interesting to me.

I am a fan of modern architecture but too many modern church structures are bland, utilitarian, and boring, it seems, with no architectural distinction whatsoever; I have seen charming buildings demolished to make way for eyesores, usually alongside major highways.

Cathedral Church of the Advent, Birmingham

Fortunately, there are still distinctive old church buildings in the northside city center of downtown Birmingham with congregations founded within a year or two of the 1871 founding of the city.

The Cathedral Church of the Advent, an 1883 Gothic sandstone structure, stands on 20th Street across from the Harbert Tower (www.adventbirmingham.org). When I worked in downtown Birmingham in the ‘90s, I would often take a lunchtime break in the peaceful Advent church garden to read and reflect. A block away, on the other side of the Harbert building, is the First United Methodist Church’s brooding Romanesque structure built in 1891 (www.firstchurchbham.com). 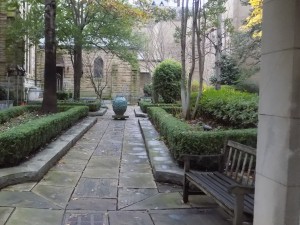 It is noteworthy that the architecture of the 1989 post-modern Harbert office tower – formally known as the Regions-Harbert Plaza – acknowledges its proximity to Cathedral Church of the Advent and First Methodist in its building materials and architectural set-backs and flourishes.

Built in 1888, the Victorian Gothic First Presbyterian Church (www.fpcbham.org), east of 20th Street, is only a block over from the Cathedral of Saint Paul (www.stpaulsbhm.org), a Neo-Gothic building completed in 1893, whose brick masonry is so reminiscent of many of the downtown structures from Birmingham’s early decades.

On a recent Saturday morning a couple of days before Christmas, I went into the Cathedral. A couple of parishioners were in the sanctuary preparing for mass. The majestic impact of the soaring room was heightened by the Moller pipe organ that was at that time filling the building with bright and vibrant sacred music of the season.

Outside, the day was overcast, but the stained glass windows shone brightly as the sun occasionally burst through grey December clouds. I sat in a pew toward the back and listened to the music for a while, savoring the solitude and peace of the room and the history it encompassed. Then it was time to travel out into the busy streets and continue with holiday preparations.

May 2018 bring good news. Look for and savor the beauty that surrounds you. Happy New Year.