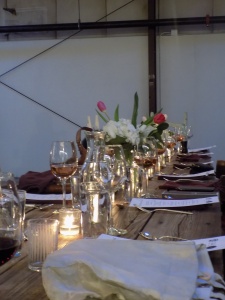 Every Friends of the Café event at the Alabama Chanin (www.alabamachanin.com) factory in Florence is special. I have not found its match in any other similar event I have attended. The sense of community and camaraderie is unparalleled and once one attends, one is hooked. When I was leaving the Factory this past weekend, Natalie Chanin, who hosts the dinners with her amazing staff, asked me what had been my favorite dinner so far (since I’ve attended most of them). I just started naming names and had no clear favorite. There is no clear favorite; each has been singular and memorable.

The April 15 dinner last week was especially noteworthy since Chef Scott Peacock was in the kitchen. In 2010, Peacock, the James Beard Award-winning Alabama native, left his position as head chef of Watershed in the Atlanta area, moved to Marion, Alabama, in the middle of the Black Belt, and became, for many who knew of him, a bit of a mystery man.

I first heard that Peacock was in Marion when a friend in Greensboro told me that Scott had contacted his mother to be interviewed for a documentary project about older Alabama cooks and their foodways. Over the past few years, I heard less and less about that project and wasn’t even sure if Peacock was still kicking around Marion. He has been a columnist for Better Homes and Gardens and I know he might occasionally be sighted at events such as a Rural Studio supper in the Black Belt.

His cookbook, The Gift of Southern Cooking (Knopf, 2003), is a collaboration with Edna Lewis that is full of wisdom, information, and fresh takes on traditional recipes. It is an indispensable part of my kitchen library. Ms. Lewis, a Virginia native and expert on Southern food, gained fame as a cookbook author and in the kitchen at several New York restaurants. She and Peacock became close friends and she lived with him in Georgia where he cared for her in the last several years of her life.

In fall 2016 Natalie Chanin’s online journal did a piece on Scott Peacock’s experimentation with indigo and other plant-based dyes at his Marion home base and ended that fascinating conversation with the information that she and Peacock would be hosting a Friends of the Café dinner in Florence in spring 2017. Proceeds from the event would benefit Southern Foodways Alliance (www.southernfoodways.org), one of Alabama Chanin’s favorite causes.

On the afternoon of the event I met my friend Cindy in Cullman and we made the trek to the Alabama Chanin Factory on a beautiful Holy Saturday evening in the Shoals.

As the passed hors d’oeuvres began to make the rounds among the assembling guests, there was much excitement about the varieties and tastes on display. In fact, the entire meal was a lesson in simplicity and finding the best flavors in the best ingredients. Most importantly, allow those ingredients to speak for themselves.

The hors d’oeuvres included iced oysters on the half shell with Edna Lewis’s spicy dipping sauce. The dipping sauce was simple and elegant with salt and vinegar, green onions and shallots, garlic, peppercorns, and parsley. It was phenomenal, as were the Gulf oysters.

Other hors d’oeuvres included fresh radishes with a bowl of whipped butter for garnishing. One of the diners asked if it was a “Southern thing” to eat buttered radishes; I wasn’t aware that it was but after tasting those, it is now – at least at my house. Beautiful and delicious halved soft boiled eggs from Cog Hill Farm were passed around with a garlic-parsley sauce.

Beside the radishes were razor-thin slices of Pineywoods beef sausage from the Black Belt. The Pineywoods cattle are an endangered breed directly descended from cattle left on the Gulf Coast by Spanish explorers in the 15th and 16th centuries. A renewed effort is being made to locate the breed, which lived for centuries in the wild, and replenish them (www.pcrba.org).

The final hors d’oeuvres to be passed were tomato and goat cheese toasts that had the crowd exclaiming. The goat cheese was rich and buttery and one of the servers said it was from Humble Heart Farm in Elkmont (www.humbleheartfarms.com), I regularly buy my goat cheese and other products from the Spells at Humble Heart and was delighted to see them represented at this very special dinner.

As the diners were seated for the meal, the three-course menu sounded deceptively simple: salad, stew, and dessert. The simplicity of the menu allowed the fresh and carefully mixed ingredients to take center stage and the flavors built on one another as a seemingly simple meal created a complexity of tastes and discoveries.

The salad featured fresh watercress that Natalie Chanin had gathered from just down the road earlier in the day. The watercress was mixed with a number of other foraged greens dressed in a simple but perfect vinaigrette. It was noted later that Scott Peacock had assembled each of the several dozen salads himself.

The second course was a steaming “Straddle Stew” with chicken and ham broth, onion, garlic, peppers, turnips, carrots, tomatoes, Carolina Gold rice, peas, and collards. It was a hearty and delicious stew accompanied by servings of Peacock’s mother’s “hot water cornbread.” The recipe for Dorothy Peacock’s hot water cornbread is in The Gift of Southern Cooking and I look forward to making it soon. The stew was paired with a Z. Alexander Brown pinot noir; I knew the label but did not know until this dinner that the proprietor of this winery is Zac Brown of Zac Brown Band fame (www.zalexanderbrown.com).

The final offering was coffee and “three kisses goodnight” as the diners were presented with small plates overflowing with tiny tea cakes, benne brittle, and tiny chocolate truffles.

Finally, Scott Peacock emerged from the kitchen and shared thoughts and charm with the assembled diners. He introduced the staff that had helped him in the kitchen and talked about the good works of Heirloom Harvest (www.heirloomharvest.org), Will Dodd’s non-profit that cultivates a better and more sustainable connection between Alabama farmers and Alabama restaurants and consumers. Heirloom Harvest had gathered much of the food we consumed that night.

It turns out that Scott Peacock is not elusive at all. He was warm, funny, and giving as he met with diners and signed cookbooks at the end of the night.

In the past, I have praised Natalie Chanin and her cultivation of community. In gathering my thoughts about the Scott Peacock dinner, I realize how much she also cultivates education – about purveyors, products, movements – that her diners might not hear about otherwise. Heirloom Harvest. Cog Hill Farm. Pineywoods cattle. Z. Alexander Brown. These are things I had to research as soon as I got home from Florence.

The 2017 Friends of the Café season is underway with four more events to come between now and October; I am happy to be able to participate. 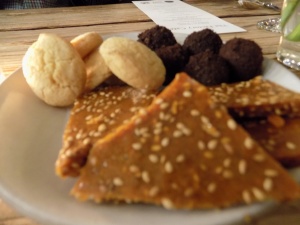