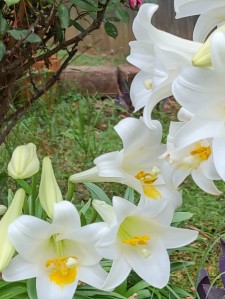 I have been staying with a sick parent 24/7 for a couple of weeks now. My dad put a small raised flowerbed in the backyard right after they moved to this house on a mountain slope. The bed is anchored by four rosebushes; lantana and other perennials pop up as Spring turns to Summer.

When they first moved here, Mother started planting the inevitable Spring Easter lilies in a small corner by the fence in the back of the yard when they began to fade. Dad said they wouldn’t come back the following year, but they did. Eventually, that tiny patch was crowded and the annual Easter lilies in pots began to be transplanted to the raised bed, along with the occasional Calla lily.

This year’s crop of lilies was slow to bloom, but they are finally splendid and, on this rainy morning, I count about three dozen blooms either fully open or about to pop.

Finding time to look out a back window is a welcome respite from sick-bed duties. Two days ago, two chickadees worked hard to build a nest on top of a post on the back porch. A front came through and the next morning the small birds’ handiwork was scattered on the ground. I noticed later that the scatterings had been gathered into a neat pile on the porch floor. I hope it was the chickadees and that they plan to make another effort when the weather calms down.

Last night, when I let Lulu the chihuahua out, she and I stood and watched our first fireflies of the season as they floated across the backyard and in the woods below. Back in the house, I related the mating rituals of fireflies to Mother. I learned the ritual, which consumes the fireflies’ two week adult life-span, from my readings of scientist E.O. Wilson.

Once again, I remember that one can find real peace and pleasure by pondering the world just outside the door. 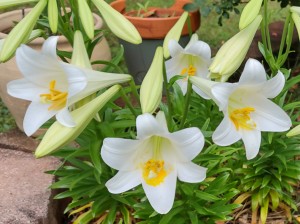