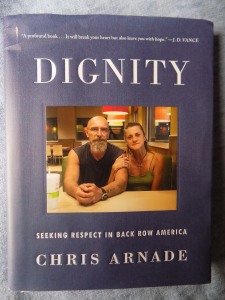 At a busy intersection in Birmingham, a woman representing the local “restoration ministry” approached the car for a donation. She announced that she was “Sister C____,” a recovering addict, that this church changed her life and that of other addicts, and, as the traffic light changed, she handed me her flyer and told me that I could contribute on the website or by mail, if not in person. The address was on the flyer (www.birminghamrestorationministries.org).

We drove on and I handed the flyer to my mother, commenting that “it takes a lot of courage to stand in the middle of the street and announce that you’re a recovering addict,” to which my mother replied that we should go back and make a contribution.

By the time we made it back around to the intersection, the woman and a woman identified as her “sister” were packing up and calling it a day. My mother rolled down the window, handed her a donation, and said, “See? We didn’t forget you.” Sister C____’s gratitude and blessings seemed real and heartfelt and I was glad we had gone back.

Mother has always had a charitable impulse for the down and out and recovering. Dad served their church in Tuscaloosa as co-chair of the Benevolence Committee for years. He and the committee were generous, but Dad was also alert to any possible scam and careful in the spending of what he considered to be “God’s money.” On occasion, if a client asked for an extra that wasn’t a necessity – and especially if a child was involved – Mother would say “If the fund won’t pay for it, I will!”

When I was directing a production of Samuel Beckett’s Waiting for Godot in the 1980s, I suggested to the actors playing Estragon and Vladimir, the principal characters, that they should think of their characters as homeless. One of the young actors very earnestly announced that he had never seen a homeless person.

“Then you haven’t been looking,” I responded. The other cast members and I began to list the places where he could look and see the homeless that very day as he drove home. We also provided the locations of shelters where he could see people lining up each evening in hopes of securing a cot and a meal.

He returned to rehearsal the next day, shaking his head. “I had no idea.”

Author Chris Arnade has been looking. And what he has seen is chronicled in his new book, Dignity: Seeking Respect in Back Row America, (Sentinel, 2019). Arnade, who has a Ph.D. in Physics from Johns Hopkins and twenty years as a successful Wall Street trader, began to explore neighborhoods he was warned to steer clear of. He began with the Hunts Point community of the Bronx and traveled through America, hanging out with addicts and the homeless, the unemployed and the marginalized, displaced labor union members, immigrants, and people who are generally on the fringes of 21st century America. Arnade labels them as “back row America.”

Not only does he look; he also listens – carefully, and without passing judgment.

Arnade left Wall Street to begin a three-year mission to meet “back row” residents in diverse communities throughout the country. Among the places he visits are Bakersfield, California; Bristol, Tennessee; Buffalo, New York’s “East Side”; Lewiston, Maine; Lexington, Nebraska; Milwaukee, Wisconsin’s “North Side”; the Ozarks; Prestonsburg, Kentucky; Selma, Alabama; Youngstown, Ohio; and places in between.

Along the way, Arnade meets people, lets them talk, and documents what they say. “If I had an obligation to them,” he writes, “it wasn’t to assume what was best for them; rather, it was to listen and try to understand what they valued, what they wanted, and not get in the way.”

The interview style is patient. He waits. He doesn’t lead. In a conversation with a Mexican American woman, he listens as she speaks at length, and with measured prejudice, about members of the Somali community who have immigrated to her small town on the great plains. When she is finished, Arnade writes, “I wait for her to continue.” She does, and her comments illuminate the plight and goals that inspire her, and people like her, to, in her words, “risk their lives in a desert or swimming across a river.” Ultimately, she says, “It is about opportunity.” Ultimately, she says, “I love America.”

Dignity is filled with such testimony and with Arnade’s photographs of people and places he sees along the way. Many of the photos are of the people you might avoid eye contact with in the parking lot, on the sidewalk, in the store aisles. “The walks, the portraits, the stories I heard, the places they took me, became a process of learning in a different kind of way. Not from textbooks, or statistics, or spreadsheets, or Power Point presentations, or classrooms, or speeches, or documentaries – but from people.”

Many of these portraits are taken in each community’s McDonald’s, which becomes a focal point of the travels. At the beginning, in Hunts Point, Arnade goes to the McDonald’s every day “because everyone did.” The fast food place becomes his haunt everywhere he lands. Part of his process is to go to “the busiest McDonald’s in the community …, eventually talking to the morning regulars.” He notes that, in many communities, McDonald’s is one of the few restaurant options, yet “we make fun of them for going there.”

Arnade also finds himself visiting the houses of worship in the places he lands. He begins his travels as an atheist, but he finds himself at a place where he cannot “ignore the value in faith, not as a scientist, not as a person who claimed to want to learn from others.” He observes Bibles in crack houses, Korans in abandoned buildings. He tells of a picture of the Last Supper that a homeless couple carries with them wherever they find themselves – abandoned buildings, sewage-filled basements, under expressways. He writes, “It is the only real possession they own, beyond the Bible.”

My biases, my years steeped in rationality and privilege, was limiting a deeper understanding. That perhaps religion was right, or as right as anything could be. Getting there requires a level of intellectual humility that I am not sure I have.

Still, he observes that “the few success stories told on the streets are of relatives, friends, or spouses who found God, got with the discipline and order of a church, and moved away …Faith is the reality and a source of hope. Science is the distant thing that doesn’t necessarily do much for you.”

Arnade does not cling to religion, but he knows how to testify. He examines the “educational meritocracy” that spawned people like him, and he finds it lacking.

It is a wholesale rejection that cuts to the core. It isn’t just about them; it is about their friends, family, congregation, union, and all they know.

The educational meritocracy is a well-intentioned system designed to correct massive injustices that enslaved, demeaned, constricted, and ranked people based on the color of their skin, sexuality, and gender. Yet in attempting to correct a nasty and explicit exclusion, we have replaced it with an exclusion that narrowly defines success as all about how much you can learn and then earn.

It is a system that applauds itself for being a meritocracy, allowing anyone to succeed. Implying that those who don’t choose this path, who can’t or don’t pick up and move constantly, who can’t overcome the long odds, are failures and it is their own fault.

Arnade laments the fact that Wall Street, his “old world,” was given whatever it wanted, no matter the damage, and what it wanted was “to lower labor costs no matter how. Mostly that meant shipping U.S. jobs requiring muscle overseas and bringing jobs requiring college here.”

Arnade realizes that the values of the meritocracy are not shared by all.

We didn’t think about changing our definition of success. It didn’t occur to us that what we valued – getting more education and owning more stuff – wasn’t what everyone else wanted.

It isn’t just about money. These entire communities are stigmatized socially and culturally. The feeling of being excluded, of being different, is more than about what things you own; it is also about what you know, what you learn, how you approach issues.

Much of the back row of America … is humiliated. The good jobs they could get straight out of high school … have left. The churches providing them a place in the world have been cast as irrational, backward, and lacking. The communities that provided pride are dying, and into this vacuum have come drugs. Their entire worldview is collapsing, and then they are told this is their own fault: they suck at school and are dumb, not focused enough, not disciplined enough.

We have implemented policies that focus narrowly on one value of meaning: the material. We emphasize GDP and efficiency, those things that we can measure, leaving behind the value of those that are harder to quantify – like community, happiness, friendships, pride, and integration.

Arnade realizes that the schism in this country is not so much a race issue as it is a class issue, and class — the “haves” and the “have-nots” —  is his focus. Arnade’s comments amplify my own concern that we currently have a government that hates, villifies, and exploits the poor and underserved. Neither side of the aisle is exempt. Arnade carefully avoids partisanship throughout his book, but he does observe that the current political climate is rife for the “politics of blame” that so demean us as a nation.

Finally, the book’s title summarizes the theme that Arnade continues to reference. “Most of all,” he writes, “I ended up finding what is often overlooked in stigmatized neighborhoods: dignity.”

This essay quotes liberally from Arnade’s book because I think it’s important that we hear his unfettered voice.

When I started “Professional Southerner” in 2014, I envisioned it as an escape tool, a place to ponder and share those people, places, and things that caught my fancy and gave me insight or delight. At first, that was true. As the years have gone by and I have observed the world around and beyond me, I notice that I am more drawn to reflections that try to make sense of what’s going on. I’m trying to understand a world that seems – in so many ways – to be veering away from the ideals of what our country means and what it should strive to achieve.

Books like Dignity help me to try to put a finger on what’s going on at the end of the second decade of the 21st Century.

It is a powerful and moving document of this pivotal and decisive moment in our time.