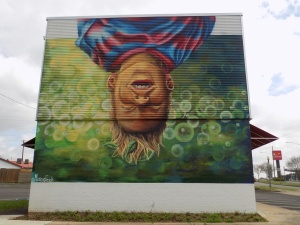 A few weeks ago, before stay-at-home orders but when it was evident that this thing was not going to disappear quickly, I checked to see if a local restaurant that I go to regularly was still open. It was Tuesday and it is my habit to have dinner there on Tuesdays. My friend Christina was usually behind the bar on Tuesdays and there was a coterie that often showed up for dinner at the bar on Tuesday.

I checked in to see if Christina was there and, after telling her I might not show up, I thought long and hard about my decision to go out. I decided to drive over and check out the restaurant’s parking lot. It was almost empty so I parked near the entrance and walked in to be greeted by familiar staff and a room full of empty tables, judiciously spaced a suitable distance apart.

A couple of customers were sitting at the bar; Christina looked up in surprise as I walked in. I took a seat at the far end and kept my distance. Before long, the other Tuesday night crowd arrived – “to show support,” one said – and we dined at the bar in an otherwise empty restaurant. A few people phoned-in take-out orders and began to filter in and out.

One couple in the small gathering had recently seen Diana Ross in concert, someone else began to softly hum something, and, before long, we were all singing Diana Ross in the almost empty restaurant. Inevitably, “Stop! In the Name of Love” began, everybody knew the moves, and we sang full-throttle. The chef came out and suggested to Christina that we keep it down so as not to disturb the other customers. There were no other customers.

Nobody said so that night, but we all knew that this would be the last outing for a while. Two days later, Christina texted me: “Dine in is shut down.”

Pepper Place, my favorite farmers market, located in downtown Birmingham, has converted itself to a Saturday morning drive-thru. I placed and paid for my order online, drove to the market site on Saturday morning, was directed to the stations of the farmers I had purchased from, popped the trunk open, my produce was deposited, and I drove away. The Pepper Place Saturday market has always been a great place to linger and people-watch; now it’s back to its basics – providing fresh, locally grown farm products to a grateful clientele in a safe and efficient manner.

On the way back from the market to my parents’ house, I swung by Five Points South. There was the usual component of walkers and runners and dogwalkers and the homeless, but store fronts were shut tight and the place, where I have spent so many enjoyable moments with friends, seemed desolate and somehow forsaken on a bright Saturday morning. 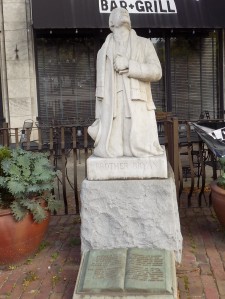 In Five Points South, across from Highlands Methodist and Frank Fleming’s “The Storyteller” fountain, “Brother Bryan” prays quietly in front of a bar and grill – in a location that has seen a multitude of restaurants and bars come and go. James Alexander Bryan (1863-1941), the long-time pastor of Birmingham’s Third Presbyterian Church, was noted for his selfless ministry to the poor, homeless, and destitute. A city park and mission still bear his name and the statue in his honor has been a fixture in the city as long as I can remember.

In good times, he is there almost hidden among the revelers and restaurant clientele; he’s there in bad times, too.

Leaving Five Points South, I was in Homewood, a Birmingham suburb just over the mountain from the city. Homewood’s main commercial district was quiet, but that community has a lot of kids on bikes, families in front yards and on porches, runners and joggers and dog-walkers almost anytime, and the current times are no exception. Traveling down Homewood’s Broadway, I found myself behind a gelato truck, its happy jingle blaring.

In my parents’ neighborhood, stuffed animals began to appear in windows, on porches, and in trees and shrubs – inspired by the world-wide trend of the “teddy bear hunt” to provide a distraction for children. My mother was the first on her street to put a stuffed animal in the window and I awoke one morning to the delighted shrieks of a neighborhood toddler on the sidewalk outside who had just made his spotting. Within a couple of days, most of the neighbors had stuffed animals hidden somewhere on their premises, too.

Over my alleged “spring break,” I began to catch murmurings that this remote teaching thing might last until the end of the year. The specter of teaching for nine more months in a way that is anathema to everything I believe about education – especially as a performance instructor – haunts me.

Arriving back at home on Sunday evening, I was pleased to see that the irises by my front door were bursting into bloom and the wild potted rose that I have been training over my back fence and gate was showing its first tentative blooms of the season. I sat in my yard and enjoyed the beauty of the season and the nearly full moon that was just beginning to show in the pale sky.

The next day, I submitted my letter of intent to retire. My retirement will go into effect on June 1.

It has been a horrible year so far. But pay attention to the nature around you. It has been a beautiful spring, hasn’t it? 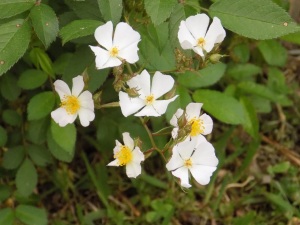