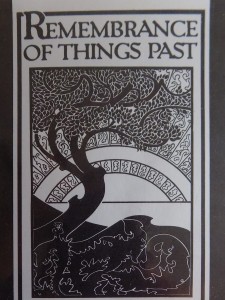 About fifty pages into A la recherche du temps perdu – the 4000-page novel of class consciousness, neurosis, and love by Marcel Proust (1871-1922) – comes the novel’s most iconic moment. The narrator dips a madeleine into a cup of tea and that food memory stimulates thousands of pages of detailed observations and digressions about his life and the lives of those in his orbit, interspersed with philosophical reflections about time and memory.

I am a life-long reader. My parents provided me with a huge collection of Little Golden Books before I could read. When I was three or four, I wandered to the furniture store around the corner from my parents’ business in downtown Tuscaloosa and independently bought a book shelf for my collection. Mr. McGraw didn’t ask questions — he just put it on my parents’ account.

From elementary school, I usually had at least a couple of books working at any given time and summers were always for reading, in addition to riding my bike to Baker’s Candy Shop, listening for the popsicle man, and hanging outdoors. The reading habit continued through college, graduate school, a theatre and academic career, and beyond. I read a lot of serious fiction, but was also partial to history, essays, and other non-fiction, especially biography.

Lately, my reading has tapered off – not by choice but by time and necessity. I still read daily and frequently, but mostly magazines and things that may be started and finished in a single sitting. Reading is still a tactile experience for me – I like the feel of the object in my hands, the ability to dog-ear a page with a passage to which I want to return, the compulsion to underline or write a comment in a margin. My library is still a bound one on book shelves and not one I retreat to on a sterile small screen.

I decided to tackle a long-time mission this summer and start to read all of Marcel Proust’s sprawling early 20th century novel in seven parts. The preferred and more accurate translation of the title is In Search of Lost Time but the most popular English translation is C. K. Scott Moncrief’s Remembrance of Things Past. I am partial to Moncrieff’s (inaccurate) title because of its reference to Shakespeare’s Sonnet 30.

Proust’s novel has been referred to as the literary Mount Everest. I’ve read bits and pieces over the years and frequently refer back to the “madeleine moment” which stimulates my ongoing interest in food memory. I’ve skimmed through other sections of the work and remember an overwrought 1984 film adaptation of the novel’s “Swann in Love” episode starring Jeremy Irons.

I was immensely moved by playwright Harold Pinter’s film adaptation of the sprawling work, published as The Proust Screenplay in 1977. The film, which would have been directed by Joseph Losey, was never produced, but the haunting – and skillfully taut and compressed – screenplay is beautifully rendered and evocative of the prose that inspired it. I still long to see the film if it’s ever made but I doubt that it has a chance with contemporary audiences and tastes.

The lush, deliberate, and lyrical prose of Proust’s novel is out of fashion in our dismal age of texting, twitter, Instagram, and Facebook. When I first tackled a complete navigation of the book this summer, I wasn’t sure I would make it. As of today, I am only about a third of the way through, but I am compelled to move forward and determined to complete my task; each day it becomes more of a pleasure and less insurmountable.

The thing that I never realized in reading random and isolated fragments of the novel is just how frequently funny Proust is. To read the novel as a whole is to go through a master class of literary composition and style. Proust engages in pages of precious and immaculate description which follow dozens of principal characters and hundreds of supporting roles. His social satire sneaks up on the reader until its anticipation becomes part of what compels the reader forward.

The passages about the faithful “clan” of the Verdurin household and Mme. Verdurin’s stranglehold on her little band of acolytes are as funny and biting a comedy of manners as the early and most wicked works of Evelyn Waugh (like Decline and Fall and Vile Bodies). I rarely laugh out loud while reading novels but I have laughed many times during my summer of Proust (which seems destined to become a fall of Proust and perhaps even the year of Proust).

Finally, after years of resisting the urge to read Remembrance of Things Past in its entirety, it feels like I have reached the time of my life in which its exploration of art and time and memory and nature, love and jealousy and the fragility of life, self-doubt and self-examination and what, ultimately, is the meaning of our brief time on the planet have a resonance for me that I have missed in the past.

It’s well worth the effort. You should read it some time. Find the time of life that’s right for you.