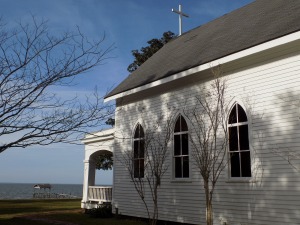 A holiday ritual that wasn’t curtailed this year was the sending of Christmas cards. Professional Southerner posts in previous years have detailed my annual search for historic and/or picturesque churches to be found around Alabama during the December holiday season. One of these structures usually is featured on the next year’s Christmas greeting.

This year’s church, Sacred Heart Chapel, overlooking Mobile Bay from Baldwin County’s Eastern Shore, is a church that dates from the 1880s.  I’ve photographed the chapel many times over the years. Until 2019, none of my images struck my fancy as being Christmas card-worthy, although the building is a lovely example of 19th Century Southern coastal architecture. Its large front porch is a particularly charming feature.

The chapel is only used for summer services. A year ago, walking along the deserted grounds, I was struck by the simple grace of the Gothic windows against the white planks of the building. Beyond the porch, the broad churchyard sweeps down to a vista across Mobile Bay, interrupted only by the ruins of an old pier from a previous hurricane.

Even before the pandemic, I had decided that the side view of Sacred Heart would be the 2020 Christmas card image. There was something hopeful in that outward view. Comes the pandemic, and I was firm in my conviction that whatever hope I saw in that particular image would be part of a holiday message this year.

The main message inside the card includes the message “Looking Forward to Christmas and the Year to Come.” And, as always, “Peace on Earth.”

The search for an image for the 2021 Christmas card is more abbreviated this year since I was not able to travel the length of the state to photograph churches and other scenes of December.

Among the tourism trails of north Alabama is the North Alabama Hallelujah Trail (www.northalabama.org/trails/hallelujah) featuring thirty-two places of worship that are at least 100 years old and stand on their original sites. Many of these are examples of vernacular Southern church architecture, others are Gothic or grander, one is a synagogue, and one is simply an open-air facility with cedar posts and a roof.

My mother’s family is from Cullman County, Alabama, — the descendants of Scotch-Irish immigrants who landed in Virginia and the Carolinas in the late 18th-early 19th century and settled in the frontier of Alabama soon afterward. My annual Christmas cards have featured churches from all over Alabama but I never located one in Cullman county that called out to be used. Family-related churches in Cullman around the communities of Kinney Grove, Ryan’s Creek, and Bethany – some of which were built by some of those ancestors – have been replaced by more prosaic modern buildings that don’t make the Christmas card cut.

The Hallelujah Trail features a church in the Cullman County community of Logan. A couple of weeks ago, I had the perfect opportunity to travel down to see it in person. Much of Cullman County is off-the-beaten-path and Logan seems even more remote than most. It’s beautiful hilly country with plenty of farms, pine thickets, and ponds along the narrow roads.

At the end of one particular road is Shady Grove Church, which started out in the 19th Century as pews in an arbor. The current building dates to the late 1800s. It’s a serene place on a lonely road, surrounded by the quiet of pristine forests. Across the road from the church is an old cemetery which holds generations of locals along with the remains of soldiers from both the Union and Confederate armies. 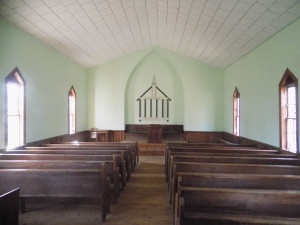 The doors to the building were locked but, through a window in the front door, the entirety of the church interior is visible. A unique touch, a hand-carved church structure, decorates the arched cove behind the pulpit. A wooden outhouse provides necessary services behind the building. Somebody had made the effort to install fresh flowers in small vessels in each window; it’s a small touch – but one that speaks to the dedication that keeps Shady Grove Church a place worthy of a remote road trip.

In activist/poet/writer Katha Pollitt’s “Plague Poem,” she muses, “Perhaps it is best that we go away now” as she considers ongoing environmental and social sins. It’s an interesting thought, but this Christmastime, I choose to hope for the best and for an opportunity to right the wrongs that plague us when we get to the end of this current spate of unfortunate circumstances.

Merry Christmas … And all hope for an amazing and triumphant New Year.