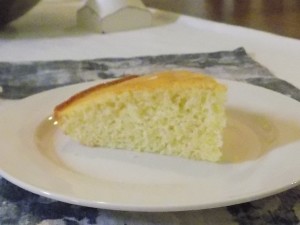 The first time I remember baking anything, I was in my 30s already and my Grandmother Harbison’s hip had broken while she was taking cornbread out of the oven. After following the ambulance to the hospital and meeting my parents there to get Grandmother ensconced in a room, Grandmother was worried about what Granddaddy Harbison was going to eat while she was hospitalized. As far back as I knew my Harbison grandparents, Grandmother always took care of the cooking and the inside of the house and Granddaddy, who had an impressive green thumb, took care of the yard and the outdoors.

He didn’t cook. And, back then, with very few exceptions, neither did I.

But this was an emergency so I went back to my grandparents’ house and pondered what to do. There was a pot of Grandmother’s homemade vegetable soup already simmering on the stove and Granddaddy assured me that as long as he had cornbread and buttermilk in the house, he could make do for himself for a while. There was buttermilk in the refrigerator and, since grandmother’s cornbread had been ruined in her fall, I said I’d make a cake of cornbread.

I had no idea what I was doing. I pulled out the cornmeal and was relieved to see a recipe for cornbread on the package. I followed the directions carefully and was amazed and relieved when the final product actually looked and tasted like cornbread. Granddaddy declared that it was good.

I have been making cornbread ever since and have amended that original recipe over the years. Here’s the thing, though: I still have to follow the recipe to make a decent cornbread. As long as a recipe is available, why bother to memorize?

Over the years, I have gotten more comfortable in the kitchen. As a lifelong bachelor, that is a necessity. I vowed never to become like one of my bachelor professors at Alabama who never cooked, but was at Morrison’s Cafeteria every day at 5:30 p.m. to take his meal. He died not long after that Morrison’s on University Boulevard shut down; I worried that his fatal illness may have been triggered by food deprivation.

My grandmother, Eula Harbison, was a natural magician in the kitchen. She came from the era in which relatives might arrive for long stays and, later, company might happen to drop by for an unannounced visit, especially on a Sunday afternoon. She always had food warming in the oven and a cake on hand to offer her guests with a cup of percolator coffee. She made a variety of cakes, but my favorites were always the most simple and unadorned. On some occasions, she would apply a sugary glaze to these basic cakes, but as often as not there was no glaze. Her hospitality always seemed humble and effortless; she was a superb host.

This comes to mind tonight because I just made an olive oil cake and, even though olive oil cake was not part of Grandmother’s repertoire, it reminds me a lot of the kinds of cakes she would always have on hand.

An olive oil cake is a traditional Italian cake that substitutes oil for butter. It can be amended and embellished in any number of ways. It’s a common cake, but when I mention it to people, most are not aware of it.

I was aware of it, but I never recall tasting it. That changed in March when I was on a business trip in Memphis and having dinner with friends. The dessert menu at Catherine and Mary’s, an Italian-influenced Southern restaurant not far from Beale Street, listed an olive oil cake.
The cake was moist and flaky with a frothy cream and drizzle of sauce. It was the perfect way to top off a rich meal. I got back to Birmingham and vowed to experiment with olive oil cake recipes. No experimentation was necessary; it’s a straightforward and simple cake that has turned out moist and delicious each time I have made it by following simple directions. In fact, I was just asked to make one for an anniversary gift. With that success under my belt, I already am planning ways that I can adorn the cake for special occasions in the future. I am not confident as a baker, so olive oil cake may be my gateway into more adventurous baking.

I don’t live a “company dropping by” sort of existence, but I would be proud to offer a slice of olive oil cake to company that might call in the future.