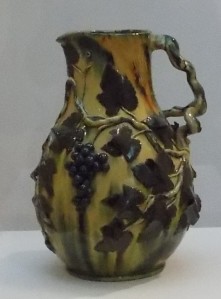 I first saw photos of architect Frank Gehry’s Santa Monica house in the 1970s and filed him away as an architect I wanted to keep tracking. Gehry and his wife bought a two-story pink Dutch Colonial bungalow on a conventional neighborhood street and the rule-bending architect began his process of revision and deconstruction. Parts of the interior were stripped down to the studs and exterior additions incorporated materials such as plywood, corrugated steel, glass cubes, aluminum siding, and chain-link fencing. To be honest, I didn’t think the end product was very appealing to look at but I was drawn to the audacity of it and how Gehry thumbed his nose at convention – and the neighbors – and created a functioning house that still remains a home for the Gehry family forty years later.

Keeping track of Gehry was a smart move as his architecture flourished internationally with hallmark commissions like the Guggenheim Museum in Bilbao, Spain, and the Walt Disney Concert Hall in Los Angeles. 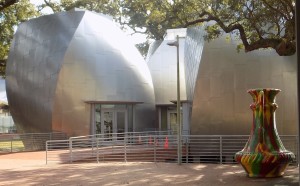 The Ohr-O’Keefe Museum of Art on Beach Boulevard in Biloxi, Mississippi, is a Gehry design that was years in the making (www.georgeohr.org). Showcasing the work of potter George E. Ohr (1857-1918), the self-proclaimed “mad potter of Biloxi,” the museum campus was well-underway when I stopped to photograph the construction site in August 2005. The “O’Keefe” of the museum’s title refers to a prominent Biloxi family that was key to the project being built. Two weeks after I photographed the construction, Hurricane Katrina dumped a casino barge on the site and construction of the museum facility was delayed until 2008.  The “pods,” a grouping of metallic structures primarily housing Ohr’s work, finally opened in 2014.

I drove over to Biloxi in 2010 when the first three buildings of the campus were newly opened. Gehry’s design plotted the five structures to leave intact the live oaks already established on the site. A brick courtyard centers the facility. The east side of the campus includes three structures – a welcome center with gift shop and two intimate galleries. The gift shop features a generous selection of pottery and ceramics by artists from within the region. The Beau Rivage Casino Gallery of African American Art includes changing shows focused on African American artists. The IP Casino Resort and Spa Exhibitions Gallery houses temporary shows.

View of “Transcendent Coincidences for Existence” by Ron Bechet; Ohr-O’Keefe Museum of Art

A small cove of the Beau Rivage Gallery houses a permanent exhibit exploring the Ohr legacy, “I Am the Potter Who Was.” Ohr spent much of his life courting scandal and controversy and his ceramics did not sell very well in his lifetime. His ceramics’ queer twisted shapes with random pinches and extreme glazes did not find a significant market while he was alive but he is now considered a modernist pioneer in ceramics.

The IP Casino Gallery was showing a juried exhibit, “Echoes of Ohr,” a survey of contemporary ceramic arts with nods to the Ohr legacy.

The west side of the campus features the most audacious architecture – three metallic pods which house some of the Ohr collection and a multi-story City of Biloxi Center for Ceramics with working artist studios and kilns. The Pleasant Reed Interpretive Center anchors the north end of the museum campus. The Pleasant Reed house was a preserved 19th century Biloxi house that had served as the home of Pleasant Reed and his family in the African American community of Biloxi. The house and its furnishings were destroyed by Hurricane Katrina and a replica of the house was built to replace it. Currently, the Pleasant Reed Interpretive Center features an exhibit, “City Within a City: African American Culture in Biloxi,” documenting Biloxi’s vibrant and self-sufficient African American community after World War II.

As much as I appreciate George Ohr and the offerings within the museum, the main draw of the Ohr-O’Keefe for me is still the distinctive Frank Gehry architecture along the Mississippi Gulf Coast. I keep returning to see how these quirky buildings continue to dance with the landscape of live oaks looking out to the Gulf and the pine forests of the barrier islands. It’s a pleasure to come across the humble museum campus amid the high-rise casinos that dominate the Beach Boulevard drive. I continue to be surprised at how much of the property along the stretch of highway remains vacant since the hurricane. I recall the grand residences that once lined this scenic drive. 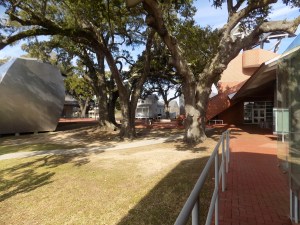 The Ohr-O’Keefe is a gem on many levels and ought to be a destination for lovers of art and architecture. It seems that the facility has been under-supported and under-appreciated in its community. George Ohr famously said, “When I am gone, my work will be praised, honored, and cherished. It will come.” Let’s hope that his namesake museum will not have to wait so long to come into its own well-deserved prominence.