Traveling up I-65 from Birmingham with a friend a few years ago, we passed a billboard for the Jesse Owens Park and Museum (www.jesseowensmemorialpark.com) in Oakville, an unincorporated community in Lawrence County, Alabama. My friend, who is from Ohio and was a college track athlete there, said, “What is a Jesse Owens museum doing in Alabama?”

“He was born here.” My friend didn’t know that; I guess a lot of people don’t.

James Cleveland Owens (1913-1980), who later became famous as “Jesse,” was born into a sharecropper family in Oakville. His reputation began to be made when the family relocated to Cleveland, Ohio, and Jesse became a high school track star before becoming a star college athlete at Ohio State. At a Big Ten meet in Michigan in 1935, Owens broke three world records and tied a fourth in a seventy-minute span.

The primary Owens legend was born from his participation in the 1936 Berlin “Nazi” Olympics where he put the lie to Hitler’s assertion of Aryan superiority by winning four gold medals and establishing an Olympic long-jump record that stood for over a quarter century. Ironically, the best visual documentation of Owens’s Olympic triumphs is seen in Olympia, German documentarian Leni Riefenstahl’s propaganda film about the 1936 Olympics. 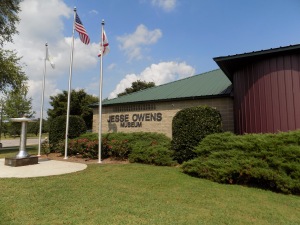 The Oakville park is a bucolic place, with views of farms in the near distance, athletic fields, and places for picnics and reflection. The museum has an impressive timeline, film, and interactive displays with artifacts and details of the life of Owens.

A sand jump pit borders one of the walkways so that aspiring athletes might compare their skills to Owens’s 26 ft. 5 ¼ in. Olympic record. 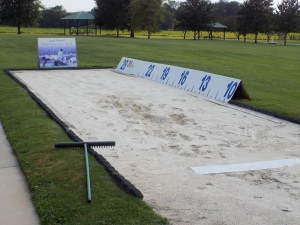 Of most interest to me is the recreation of the Oakville sharecropper’s house where Owens was born and grew up prior to the family’s move to Cleveland. A narration of the house is available, spoken by Owens’s brother, Sylvester.

Jesse Owens was the youngest of ten children – all of whom shared a pallet in a small room next to the main room. The main room also held the bed where the parents slept. The back of the house is a long room with a sparsely-furnished kitchen on one side and a wooden table and chairs on the other.

An Owens statue, by Birmingham-based sculptor Branko Medenica (www.brankoart.com), stands between the house and the museum. It shows Owens symbolically breaking through the Olympic rings. The statue was unveiled on the day in June 1996 when the Olympic torch, carried by Owens’s grandson, passed through tiny Oakville on its way to the Atlanta Olympics.