The Bright Star Restaurant’s “Night in New Orleans,” which had its thirtieth incarnation last week, has become a rite of passage for the month of August at the venerable 1907 restaurant in Bessemer, just down I-20/59 from Birmingham. Long billed as “Alabama’s Oldest Restaurant” and the winner of a 2010 James Beard Foundation Award as an “American Classic,” Bright Star has remained a popular dining destination even after the heavy industry that once defined Bessemer has slipped away (www.brightstar.com).

It was my father’s favorite restaurant; at his funeral, one of the ministers quipped in his eulogy that “Grover would sell his lawnmower to eat at the Bright Star.”

“Night in New Orleans” is a three-night event in which a New Orleans chef takes over the Bright Star kitchen and offers selections from a Crescent City restaurant. The late Jamie Shannon of Commander’s Palace and Tory McPhail, current executive chef of Commander’s, are among the notable past chefs who have presided over the event.

This year’s chef, Thomas Robey, recently took over executive chef duties at Tujague’s, the 163-year-old New Orleans staple on Decatur Street on the river side of the French Quarter. Tujague’s is probably most recognizable to New Orleans visitors for the iconic sign over America’s oldest stand-up bar on the corner of Decatur and Madison. The doors are always open and the bar is always crowded with locals and tourists alike (www.tujaguesrestaurant.com).

Chef Robey is no stranger to Birmingham or the Bright Star. He was on Jamie Shannon’s staff for previous “Night in New Orleans” events in the ‘90s and was executive chef of Birmingham’s Veranda on Highlands for several years. He left Veranda for another stint with McPhail at Commander’s before being named executive chef of Tujague’s in summer 2018.

Mother and I arrived on a Saturday evening about twenty minutes before the restaurant opened. A sizable crowd was already waiting in the Bright Star’s large lobby space – a crowd clearly made up mostly of the Bright Star’s dining room’s seasoned veterans. Some chose to sport Mardi Gras beads for the occasion and New Orleans jazz was just audible over the general din as Bright Star hosts began to quickly seat the crowd.

The menu for these events is split into two parts – one features dishes from Bright Star’s regular menu and the other is a sampling of the guest chef’s dishes from his home restaurant. Since my mother has dietary restrictions, the Bright Star part of the menu was her reliable go-to. 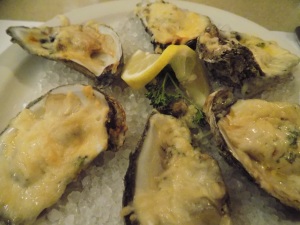 I was there, however, for the tastes of New Orleans and focused on the Tujague’s menu, choosing the cheesy char-broiled oysters as my first course. Other first course options were a shrimp and tasso bisque and a watermelon and tomato salad.

The main course offered a skin-on snapper over a corn maque choux, pan-roasted Maple Leaf duck breast, and a grilled pork loin with a mirliton dressing. I, of course, opted for the seafood and the snapper arrived atop a generous and complex maque choux, an elevated succotash-like preparation. Chef Robey’s iteration had a corn and tomato base with finely chopped peppers, green onions, peas, okra, and Creole spices. As I was trying to break down the maque choux ingredients for Mother, Chef Robey strolled past our tableside to explain that the name “maque choux” is probably a French derivation of a Native American name for the dish, which has become an amalgamation of indigenous and Creole techniques. 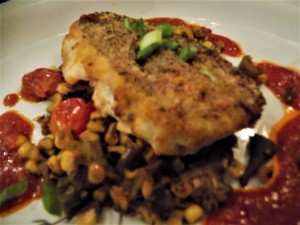 For the final taste of New Orleans, there was a creamy Grasshopper panna cotta – a nod to the minty signature cocktail invented at Tujague’s in 1918. Garnished with chocolate mints, it was a smooth capper to a rich New Orleans-inspired meal.