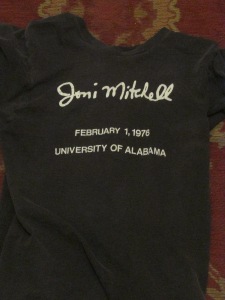 Joni Mitchell was born in Canada in November 1943 so she missed being a “Baby Boomer” by a little more than a year. The influence she continues to wield on millions of Baby Boomers renders that trivial detail totally inconsequential.

My friends from the ‘70s in Tuscaloosa are likely to remember that my obsession with Joni was perhaps alarming at times. I once decided to see if I could reach her on the phone to wish her a happy birthday. Of course, this was an unsuccessful mission but during the course of the night I managed to contact somebody at Beat poet Allen Ginsberg’s house in New York (his number was always listed and I had read that he had “everybody’s” phone number); her sound engineer’s babysitter in Los Angeles; and somebody in Saskatchewan who was very courteous but not very helpful (and who may or may not have been a relative).

I bought every album on the day it was released and listened to it until it was etched completely in my memory. If prompted, I might still be able to sing the entire Court and Spark album from beginning to end. Just hum “Love came to my door / with a sleeping roll …” to me and I’m off. When I was living in a tiny studio apartment near the campus in the mid-70s my neighbor June once knocked on my apartment door and said, “I love Joni Mitchell, too, but could you play something other than Blue for a few days?”

I became aware of Joni Mitchell as a songwriter and folkie in the late ‘60s and primarily through other singers’ covers of her songs. Judy Collins had major success covering Joni Mitchell’s songs, most notably “Both Sides Now,” and the Crosby, Stills and Nash cover of “Woodstock” was a generational anthem.

I first saw Joni herself and her inimitable style as a performer when she appeared on the first episode of “The Johnny Cash Show” in 1969. If she had the Cash imprimatur, I was on-board.

Blue, Joni’s fourth album, was the breakthrough album in 1971. Blue’s moody and reflective and achingly personal series of songs signaled the maturation, musical sophistication, and exploration that mark her entire career. The classic Court and Spark arrived in 1974 and was followed in the same year by the great live album, Miles of Aisles. This was the time in her career when Joni was most popular and receiving the most radio play. Whenever I hear or see the name of music and movie mogul David Geffen I start humming “Free Man in Paris,” which Joni wrote with him in mind.

The Hissing of Summer Lawns was released in 1975 and was the most recent album when Joni played a magnificent concert at Memorial Coliseum in Tuscaloosa on February 1, 1976. That’s when my obsession became complete.

One of the highlights of my extracurricular undergraduate life (and a key part of my education) was volunteering for the University Program Council, a student-run entity that presented concerts, lectures, movies, stand-up comedy, touring theatre, and other events on the University of Alabama campus. I worked my butt off for the organization and I joke with friends that it was amazing what we would do to get a free t-shirt back then.

By the time Joni arrived on campus, I was most often working on “artist relations” and doing my volunteer duty backstage, making sure dressing rooms and catering were up to par and contract riders were fulfilled. But I didn’t plan to forego the opportunity to watch Joni perform and got assigned to “security” and a position in front of the stage. It was one of those transformative concerts that people who attended still remember vividly and talk about. She played songs we knew but also included songs from Hejira, her next album, which would hit later in 1976.

At the end of the show and after an encore of “Twisted” from Court and Spark, I moved toward the backstage area. One of the UPC “honchos” (Gary Weinberger, I think) intercepted me because I did not have a backstage pass for that concert. I said, “Who’s gonna stop me?” (Have I mentioned that I was a cocky kid back then? … 5’6” and 115 pounds with a smart mouth — Anybody could’ve stopped me). He smirked, laughed, and stepped aside.

One of the reasons that I often worked backstage is because it was known that I would leave the talent alone; I was back there to do my job, not to hobnob with celebrities. I didn’t want to bother Joni that night, but I felt the need for one more moment in her presence.

There was already a group of people with backstage passes gathered around the dressing room door. Finally, Joni emerged holding an armful of long-stemmed roses. The crowd began to crowd her and she was gracious as she moved toward her waiting car at the ramp leading out of the building. I stood out of the way as the crowd continued to vie for her ear and attention. As she slowly made her way through the crowd, she began to hand out roses to the people around her. Others began to reach out for a rose.

I stood quietly back against the wall as she passed. A moment later, she turned around, made eye contact with me, and said, “You look like you need a rose.” She walked a couple of steps back and handed me one of the roses … Bingo.

At that time I was a full-time student and worked part-time as part of the surly crew making sandwiches behind the counter at a sketchy deli on the Strip off the University campus. The day after the concert, I went to classes in the morning and showed up for my deli shift that afternoon. I still had a literal “contact high” from the events of the previous night’s show.

As I worked my shift, friends from the Program Council came to taunt me with the fact that they had managed to get into an informal after-concert get-together at Joni’s room at the Hotel Stafford downtown. Later, other friends rushed in to let me know that Joni had just been at The Dickery, a record store down the Strip, buying albums. I was fine with that; I felt I had gotten my moment already.

Joni Mitchell never stopped to rest on her laurels as a singer and I have continued to follow her the whole time. She has never stopped her artistic growth and experimentation as both a musician and a painter.

A burglary in 1990 wiped out my entire record collection and I no longer have a complete Joni collection, but I replaced quite a few of the older albums and continued to buy new recordings as they came out.

Her musical evolution has been constant and uncompromising. She has moved from folk to rock to jazz and more experimental sounds and has always defied labeling. Her voice frolics over lush and tricky wordplay and intricate phrasing; since she mostly sings the words she wrote, her voice truly becomes a versatile multi-faceted instrument full of meaning and deep emotion.

She speaks her mind without apology in interviews and in song. Her voice transformed over her career and she reached a point when the crystalline and aching high notes were unreachable but her smoky lower register serves her well and allowed her to re-examine and transform some of the early hits. Just listen to her re-recording of “Both Sides Now” in 2000; now juxtapose it with her 1969 version. In addition to vocal virtuosity,  she is also an amazing and innovative guitarist.

I recently pulled down an old college yearbook from my bookshelves to see if that rose still survives inside the front cover. The stem is still intact but I guess the petals turned to dust years ago.

Doesn’t matter … I still have the moment.