I never know what will catch my eye at the Kentuck Festival of the Arts in Northport, Alabama, right across the Black Warrior River from Tuscaloosa. It is always held on the third weekend in October (www.kentuck.org).

This weekend, October 18-19, was the 41st running of the Kentuck Festival. I began attending when the Festival was in its toddler stage, around #2 or #3. I’m not sure which one because, like turnip greens, Kentuck now seems ubiquitous in my life. Journalist and Columbia University professor Claudia Dreifus writes that Alabama is a “hotspot” for visual and musical art and that “Kentuck is an incubator, a nursery, a home.”

The festival started on a small local scale in 1971 and has grown in size and reputation ever since, frequently and nationally being touted as among the finest of its kind. Folk, self-taught, and visionary artists have always been the backbone of the Kentuck Festival but it includes a diverse and impressive array of visual artists from the South, throughout the United States, and beyond. The festival takes place in a wooded area of a park not far from Northport’s downtown but the Kentuck organization operates year-round with resident artists, studios, galleries, and workshops spread along Main Street and throughout the city.

Everything builds to the festival. Artists, dealers, patrons, and sightseers converge from all over the country to purchase, mingle, look at art, and meet the artists. Demonstrations, musical performances, storytellers, and food areas round out the sensory overload of the event. I counted more than 250 artist exhibitors in booths spread among towering trees. An added bonus was when I stumbled upon an art installation in an environment adjacent to the Festival grounds. Meredith Randall Knight’s M.F.A. exhibition, “The Marrow of It,” features nebulous concrete abstractions nestled within and interacting with a natural environment just steps from the festival. 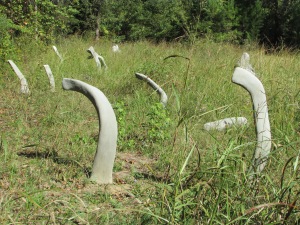 The sense of community is palpable and is one of the factors that always brings me back. Kentuck gives me an opportunity to visit with friends – many of whom I only see annually at Kentuck and some of whom I have known since I was an undergraduate at Alabama in the ‘70s. I can check out new directions in their art, find out how the art circuit has been this year, and catch up on the family.

Among those friends I count on seeing are Lou and Daniel Livingston. It’s always good to see Daniel’s bold works in clay, bright and shiny and delicate. Tim Weber, whose work I’ve followed and collected since he was in residence at Kentuck, is constantly creating new forms in his clay work as well as revisiting and fine tuning forms that he has been doing throughout his career. Close by Daniel Livingston’s area are Andrew and Etta McCall and their lovely little church structures and bird houses and free-form baskets.

Folk pottery legend Jerry Brown has his face jugs on display among the exhibitors and the Miller family from Miller’s Pottery in Brent, Alabama, throws pieces as patrons look on. The Millers have roots going back to the early days of Alabama potteries.

Amos Paul Kennedy, whose letterpress shop used to be based in Alabama locations, has now relocated to Detroit, Michigan, but still sets up a press at Kentuck to produce his array of colorful and clever posters

I have pieces by all of the aforementioned artists in my home and living with their art is made even more special by knowing and interacting with the artists. Most of my pieces were purchased directly from the maker.

Charlie Lucas, the “Tin Man” and a legend in his own right, seems always to be hard at work on new sculptures in the rusting metal enclosure that houses his work at the festival. Steve Shepard’s outspoken and brightly colored paintings, often sprinkled with his unharnessed opinions on politics and other issues, are as entertaining as the animated conversations with the artist himself.

A new Kentuck discovery this year was Clay Bush, who makes amazing bags, wallets, backpacks, satchels, and other designs from repurposed automobile seatbelts. The structure of his designs is flawless and the execution is masterful

My main purchase this year was a copper and steel balanced wind vane by Allan Kress of the Alabama Forge Council. The finely wrought copper feather moves wistfully, dancing delicately with the breeze. I never know what will catch my eye at Kentuck and I never know, until I’m there, what I’ll be bringing home. For one weekend in October, a community of artists in Northport, Alabama, supplies positive and creative energy that will sustain and inspire me in the days to come.