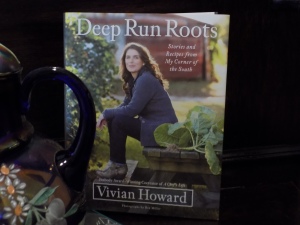 Back when I first got interested in learning about food and foodways, I discovered the pleasure of reading well-written cookbooks by chefs with a point of view. I read them cover to cover like a novel – focusing on the commentary and comments. I generally skim over the individual recipes, making note of particular dishes I might like to come back to and tackle at some point.

In the last year I haven’t had a lot of time to check out cookbooks. However in the past month I made the time to read two great ones by two Southern chefs whose food I’ve had the pleasure of enjoying at those wonderful Alabama Chanin dinners at the company’s Florence factory.

Vivian Howard was the chef for my first Friends of the Café dinner. At the time the PBS show A Chef’s Life was already chronicling her restaurant Chef and the Farmer in Kinston, North Carolina. That award-winning program has familiarized audiences with Howard’s point of view and with her husband and partner, Ben Knight, her parents and family, and staff. Many people first learned about Glenn Roberts and his preservation of endangered grains at his South Carolina Anson Mills operation through an episode of A Chef’s Life. Farmer Warren Brothers and his staffer Lillie Hardy are popular semi-regulars on the series. I was able to access a bushel of my mother’s childhood favorite apples, Hackworths, based on an apple episode of A Chef’s Life.

Vivian Howard’s long-anticipated Deep Run Roots: Stories and Recipes from My Corner of the South (Little, Brown and Company; 2016), with photographs by Rex Miller, hit the shelves in October. I bought it on the day of its release. Actually, I showed up at my local bookseller a day early and had to come back the next day to get a copy.

Anyone who is familiar with the television show will be immediately at home with the packed cookbook. Each section focuses on an ingredient and features Howard’s essay (she’s an excellent writer, by the way) and a blend of recipes suited to every kitchen and skill level.

When people who are familiar with Chef Howard find out that I attended Howard’s Friends of the Café dinner at the Factory, the first question is “Did she serve Tom Thumb?” I regret that she did not (although she did serve a version of her famed Cherokee purple tomato sandwich, so there!) but Howard aficionados know that Tom Thumb is a sausage mix stuffed into the cleaned and rinsed cavity of a pig’s appendix. It is unique, apparently, to eastern North Carolina where she grew up. Her Tom Thumb recipe comes from her father’s mother’s family. You can find the details in the book but I will never tackle that one. I’ll wait until I can taste Vivian Howard’s preparation of it one day.

Howard’s book also includes her mother’s recipe for chicken and rice that she and her mother, Scarlett Howard, made famous on the show. I can vouch for that one.

Vivian Howard is endearing and prickly and I suspect that her show’s award-winning success is due in part to the way those qualities are balanced. Her show is addictive and her book is compulsory for any cook who wants to explore authentic Southern cuisine off the beaten path. She writes:

This is a Southern cookbook, but not one that treats the South like one big region where everybody eats the same fried chicken, ribs, shrimp and grits, collard greens, and gumbo. Instead, I interpret Southern cooking the way we understand French, Italian, and Chinese food: as a complex cuisine with variations shaped by terrain, climate, and people.

Vivian Howard is what my Grandmother Harbison would have called a “pistol ball.”

So is Chef Sean Brock. His cookbook, Heritage, with photographs by Peter Frank Edwards (Artisan; 2014), synthesizes his Virginia heritage with his culinary training and his adult experience as the acclaimed chef of Charleston’s McCrady’s and of Husk, with locations in Charleston and Nashville.

Sean Brock was the chef of my most recent meal at Friends of the Café in Florence.  Now, after eating his meal and reading his cookbook, I feel like he might have been my best buddy in another life.

Heritage is as compulsively readable as Deep Run Roots and each treads some of the same territory, albeit with somewhat different perspectives. Brock’s passion for farm to table seems even more compulsive than Vivian Howard’s and his gorgeous book is an educational text as much as it is an autobiographical and culinary one.

Brock plays loose and free with his opinions on every page of Heritage. While Vivian Howard focuses each chapter of her book on a specific ingredient, Brock  titles his chapters with subjects like “The Garden,” “The Yard,” “The Creek and the Sea,” “The Public House,” and “The Sweet Kitchen,” etc. and includes a plethora of applications for each category. I love anything pickled but have had a fear of the pickling process; Sean Brock and Vivian Howard have given me the courage to pickle, maybe.

Sean Brock’s respect for his heritage, his ingredients, his colleagues, and his methods are contagious. I was already inquisitive about food and foodways and now I want to find out even more. I realize that questioning the growers, chefs, home cooks, and purveyors is not invasive but a way of preserving and “exalting” a culture and its ingredients. I already knew that but Heritage reinforced it.

A few years ago Alabama native chef Scott Peacock moved to Marion, Alabama, and was interviewing older home cooks throughout the state in an effort to archive and preserve their methods and techniques. This is a mission that Brock and Howard exemplify and carry forward in their debut cookbooks.

If you are a cook, or if you just appreciate thoughtful and well-prepared food with a human touch, these are texts you will cherish.

I learned a lot about food and cooking In the early years of the Food Network when there were real chefs like Mario Batali and Emeril Lagasse, Jacques Pepin and Sara Moulton, and  Julia Child reruns. And Alton Brown (before he became a cartoon character). Then the programming started getting dumbed down with the likes of Paula Deen and Rachael Ray and an irritating cavalcade of competition shows. I’m sure there is an evolving Food Network target demographic and I’m sure I’m no longer part of it. For me, Food Network jumped the shark with “Cupcake Wars.” Its competition show “Chopped” is one of the most joyless hours on television. Spare me the image of a prissy, sneering “Chopped” judge like Alex Guarnaschelli sniffing haughtily at a plate of ingredients no sane cook would ever willingly combine or of Scott Conant going into a bitchy snit because a cook used red onions. I love red onions. And I like them raw.

The devolution of the Food Network is why I am such a fan of the PBS show “A Chef’s Life.” In each 30-minute episode I actually learn something about food and cooking. “A Chef’s Life” focuses on chef Vivian Howard and her fine dining restaurant called The Chef and the Farmer in the small North Carolina town of Kinston. Howard and her husband Ben Knight have put Kinston on the culinary map. Both did their time in New York City restaurants but, as Howard says at the start of an episode that focuses on her cooking a meal at the James Beard House in New York, “They say that if you can make it in New York City you can make it anywhere. But I think that if you can make it in Kinston, North Carolina, you can make it anywhere.”

I haven’t made the pilgrimage to Kinston but I did have the pleasure of eating a Vivian Howard meal last summer at a Friends of the Cafe  event at the Alabama Chanin factory in Florence. It was an amazing and creative meal and an all-around special evening. At the end of the evening we diners all stood and sang “You Are My Sunshine” to Chef Howard.

“A Chef’s Life,” the series, is also a special kind of food show. In each episode Vivian Howard explores a traditional Southern food by going to the farmers and purveyors and cooks and learning the traditional methods for the ingredient. She then adapts what she learns into a special dish for the restaurant that is inspired by and pays homage to the ingredient and tradition she has researched and shared with her audience.

I recently saw an episode of “A Chef’s Life” in which the featured food was butter beans, which are just baby green lima beans. I grew up eating butter beans, usually in a succotash, but they have never been a favorite. Vivian Howard was using them to create a “butter bean burger” as a vegetarian option for the Boiler Room, an oyster bar / burger joint she and Ben opened in an alley around the corner from The Chef and the Farmer. Based on the show, I get the impression that butter beans are quite popular in Kinston.

The butter bean burger looked delicious and, for perhaps the only time in my life, I started craving butter beans. When I was at Pepper Place farmers market on Independence Day morning and saw fresh shelled butter beans I grabbed a couple of bags. Later that day, as we discussed the menu for dinner on the 4th, Mother declared that she wasn’t in the mood for barbecue, Dad was sick and not eating, and I didn’t care what we ate, really. So we ended up having steak and fresh vegetables.

As delicious as the butter bean burgers had looked, I wasn’t ready to make that kind of commitment to my Sunday dinner so when it was time to prepare the meal I poured a bag of the plump little beans into a sauce pan, covered them with chicken broth,  and added a pat of butter. I decided I would keep it simple to reacquaint myself with the beans in their simplest form since it has probably been at least twenty years since I ate butter beans. I kept the beans on low heat while I prepared the rest of the meal and then, just before I removed the beans from the heat, I seasoned with just some salt, freshly ground pepper, and a drizzle of olive oil. No more doctoring was necessary.

The beans were tender and juicy with a fresh and mellow taste and just a bit of firmness left in the almost mushy bite. They were a perfect accompaniment to my steak and simple salad.

I might become a fan of butter beans yet. 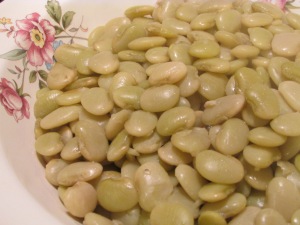