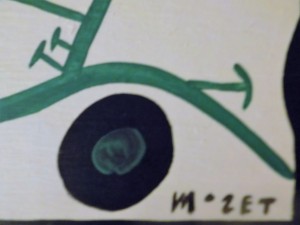 Moses Tolliver (c. 1920-2006), more popularly known as Mose T, is one of the best-known of Alabama’s many self-taught artists. During the years that I lived in Montgomery, I would often see the artist sitting on the front porch of his house on Sayre Street when I would go to Martha’s Place, a soul food place a few doors down from Mose.

I heard that visitors often went by the house and invited themselves in to Mose’s place to check out the art and occasionally buy pieces. Each time I saw him sitting on the porch I considered going up to chat but it seemed rude to just drop by without asking or an invitation.

Moses Tolliver started painting in the 1960s. Most sources say he started painting after a work-related injury left him crippled and unable to continue his job in a furniture shipping warehouse. Mose T always said that he painted prior to the accident but that the accident left him more time to devote to his painting. Either way, a colleague at the furniture company, who painted as a hobby, suggested that Tolliver take painting lessons. Tolliver rejected the lessons and continued to develop his own style in his pictures. He often said that he wasn’t interested in “art,” just in making “pictures.”

The paintings are brightly and boldly colored; house paint on plywood seems to be his preferred medium but he also painted on random objects including tree stumps, Masonite, cardboard, table tops, and jigsaw puzzles.

I became aware of Mose T when I first started seeing museum shows featuring artists, usually self-taught, who operate outside the mainstream art establishment. It was around that time when one of the Birmingham-based department stores (either Parisian or Pizitz) promoted a line of tee-shirts carrying images of Mose T’s distinctive watermelon paintings.

Collecting original Mose T paintings is challenging. As the demand for his work increased he began to let some of his children do the paintings and he’d sign them if he approved of them. He had thirteen children and it is known that his daughter, Annie, and two of his sons, Jimmy and Charles, created works that Mose T signed and sold. 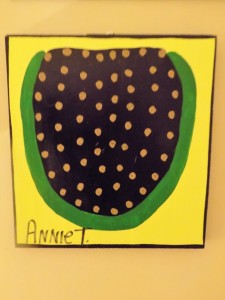 Eventually Annie Tolliver began to sign her works as “Annie T” and developed her own distinct style and Jimmy and Charles began to produce their own work. I received a gift some years ago of a watermelon in the Tolliver style that was signed “Mose T Jr.” I was confused about the painting’s origins so when I purchased an “Annie T” watermelon from Annie Tolliver herself I mentioned that I had a watermelon signed “Mose T. Jr” and wondered who painted it. “That’s my brother,” she replied tersely and returned to another customer. I still don’t know which brother signed the painting but I assume it’s either Jimmy or Charles.

Even though watermelons are Tolliver’s most iconic image, my attention was drawn to another subject to which he frequently returned: buses. The bus as subject matter for a Montgomery-based artist is evocative of the 1955 Montgomery Bus Boycott which is such a seminal part of Civil Rights-era lore. I once read Mose T quoted as saying he preferred to paint empty buses but that people seemed to like them with people in them so that’s why he added people.

While I lived in Montgomery, I began to search out an empty Mose T bus for purchase. I did find one that I liked at a dealer but the price was prohibitive at the time and by the time I returned the painting had been sold.

Later, at another dealer, I spotted a bus with passengers with a price I could consider. It’s a green bus held up by four big black tires with muddy green swirls for hubs. A driver carries three passengers. All four have their legs dangling down and their arms sticking out. One can’t help but think of Mose T’s bird paintings with the four men’s arms resembling bird legs and their mouths that recall bird beaks. Each sports a broad-brimmed hat. I thought about it for a couple of days and went back to the dealer and owned it.

I had hoped to find an empty bus for the Tolliver collection but I really enjoy my frolicsome bus with its passenger load. I have no idea if Mose Tolliver painted it or just signed it but, either way, I love to look at it. And when you live with art, loving what you look at every day is the most important element, I think.

Note: A great resource for learning about many of the self-taught Alabama artists is Kathy Kemp’s Revelations: Alabama’s Visionary Folk Artists (Crane Hill Publishers, 1994) with abundant photographs by Keith Boyer.