Maybe it’s because I’ve been reading Proust. Or maybe it’s because I watched part of a Bob Ross marathon on public television over the weekend. Maybe it’s because I heard Prince’s “When Doves Cry” night before last. Whatever it is, as I began to winterize my back yard yesterday, I found myself more attuned than usual to detail and the melancholy of changing seasons.

October was more manic than usual in this Tennessee River Valley region of north Alabama. There were drought-like conditions for a while, accompanied by record-breaking heat. Now the weather is more seasonal, but there is minimal fall color on local foliage. This will be a year when it rains, leaves turn brown, wind comes, and leaves blow down. 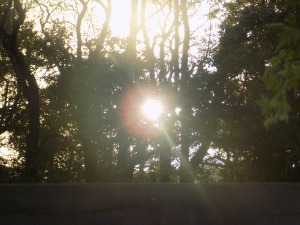 I have watched the weather closely, wanting to keep house plants outside as long as possible before moving them indoors. With a first freeze forecast for this weekend, I decided it was time to pull the trigger and move things in.

Only a few things needed to be brought inside this year. The ponytail palm I have kept for twenty years still resides snugly in the concrete pot inherited from my grandfather. A philodendron, remaining from a memorial arrangement of plants sent to my father’s funeral, is being tricky; a few months outdoors seemed to be reviving the plant to its former glory but it has dwindled again. It’s hoped that a few months being pampered in a sunny spot just inside the back door will revive it.

The braided ficus now hovers over the philodendron, standing again in its cold weather spot welcoming anyone entering through the back door. It will probably shed leaves for a while due to the shock of being moved from outdoors to inside – a distance of perhaps eight feet – but it always recovers quickly, brightening up the indoors during the drearier months.

An unexpected import to my library was a container full of basil that has spent the warm weather just outside the back door. I usually allow nature to take its course with the backyard container herbs but the basil is still so healthy that it was moved in, taking a spot in a back window. It’s on the table where I like to eat my summer tomato sandwiches, dressed with basil from those same plants. I’m challenged to see how long into the chilly season I can keep home-grown fresh basil and pesto. 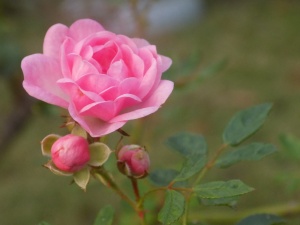 Most of the outdoor plants that will remain outdoors seem oblivious to the encroaching cold. My grandfather’s wild rose, planted along the back walk, has taken advantage of the milder weather to sprout a whole new bunch of blooms and buds. Based on weather forecasts, those may be gone by this time next week. The hydrangea is beginning to retreat. For several years now it has refused to bloom. Every year at this time I vow to do the needed soil amendments to help it flower again next year and every year at this time I regret putting it off for another year.

The redbud, which had such an impressive growth spurt over the summer, has already dropped all but two of its heart-shaped leaves. Based on the success of the little tree this year, I am finally confident that it will survive to flourish next year. Meanwhile, the camellia seems healthy and strong and should be showing crimson blooms within the weeks to come. A fragrant tea olive, planted outside the back gate, is putting on a final fall show of delicate white blossoms.

There was no time to pursue many of my desired garden goals this year, but the one I committed to was nurturing a pot-grown wild rose at my back gate (opposite the tea olive). Over the years, I have tried to train a flowering plant to climb over my back fence and gate. Jasmine never took the hint, but this wild rose, which has become a fast-growing and wildly prolific mainstay at the back gate, is taking well to being trained. It doesn’t look like much now, but I look forward to the two or three weeks in early spring when it blossoms and creates a sweetly fragrant welcome when I arrive home.

Even as the yard is made ready for cooler weather, I make mental notes of changes and improvements to be made come spring. These thoughts of next year propel me forward to face the long nights and dreary cold days ahead. 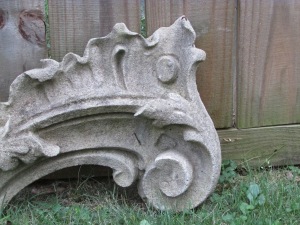 The advent of the fall season often catches me by surprise even though I pay attention to the calendar and know when cold weather and shorter days are upon us.

There is poetry in the autumn but too much of it is the poetry of decay and endings. Football season, other seasonal events, and the approach of the cold weather holidays are a consolation but I am a fan of hot sultry summers and always feel a little cheated when those fade away – especially if I haven’t had the time to take full advantage of the season.

Let me put it another way: The arrival of pumpkin spices in everything does not bring a song to my heart.

Arriving for dinner at the home of friends the other evening one of my hosts greeted me with the admonishment to not look at her yard because “it’s a mess.” The yard looked fine but I agreed with her that it’s hard to keep a southern yard looking pristine after the relentless heat of August and as the trees get ready to start shedding their leaves. 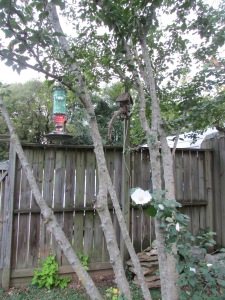 Surveying my own small back yard last night and deciding which plants would need to be moved inside and which would be left out to fend for themselves I noted that my yard somehow weathered the hottest part of the summer quite well. I didn’t lose anything to the heat this year; I had more hummingbirds than usual; my basil held out throughout the season of tomato sandwiches on freshly baked white bread.

The sweet potato vines in rust and green, grown for decoration rather than edible roots, went wild this year — overflowing their large pots outside the back gate. My neighbor’s backyard cherry tree, much of which overhangs the fence and blends with the branches of my tall Rose of Sharon tree, is already bare of leaves. It blooms magnificently before almost everything else in the late winter and starts dropping its leaves in late July before anything else is even thinking of the fall.

The Rose of Sharon still has most of its leaves and is almost finished blooming for the year, with just a handful of new buds appearing on new branches near the bottom of the trunk. I’m glad I resisted the urge to prune those a few weeks back. The final roses are in bloom on my grandfather’s wild rose bush which I rooted from a cutting. I took a cutting with buds for inside the house so that I could have a few last roses of summer both inside and out.

As plants in containers start being moved in the house and other plants die down or away, the wind sculpture, empty pots, architectural artifacts, and found objects take precedence and give points of interest as I come home at the end of the workday. The plan has always been for my back yard to capture the abundance and “collected” presence and feel of New Orleans courtyard gardens. In fact, I have a classic New Orleans garden book with an inviting photograph of a cluttered and magical courtyard garden marked for reference (pages 106-107 of Gardens of New Orleans: Exquisite Excess, 2001, by Jeannette Hardy and Lake Douglas, with photographs by Richard Sexton).

My own back yard garden is not there yet but my goal is in sight. For now, though, in every season there is always a place for the eye to rest as it surveys my long and narrow back yard. I consider that a good start.