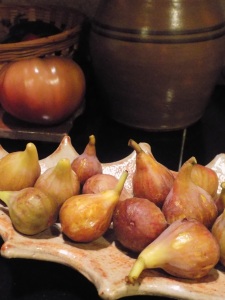 I almost passed on the downtown Greene Street Market at Nativity this afternoon (www.greenestreetmarket.com). I’m afraid I’m gathering more at my various farmers markets this summer than I have time to deal with. Birmingham’s Pepper Place on Saturday morning, Latham’s on Tuesdays, and Nativity on Thursday afternoon … occasionally, the Alabama Truck Farmers market on the industrial side of Birmingham, a few others here and there.

At the last minute, though, a brief and gentle rain revived me, and I ventured on out to Nativity to see if inspiration would hit. It always does.

My first stop is always the Humble Heart (www.humbleheartfarms.com) booth to stock up on their various goat cheese blends and to check in with the Spells, the proprietors. A running joke for Paul Spell when he sees me is to say, “Sir, would you like to sample some goat cheese?” as if I haven’t been using his product for years now.

“Goat cheese!?!” I exclaimed today, as if I’d never heard of such a thing.

Some snooty Huntsville woman, who was finishing her transaction, looked over at me and said, with a sniff, “I love goat cheese. You should try it some time.”

I smiled, batted my eyes at her, and placed my order as she cluelessly walked away.

I had given up on locally grown kale here in mid-July but one of the growers from southern Tennessee had several fresh bags of Russian kale just perfect for several applications. I had passed a booth with enticing bags of field peas and vowed to return to buy a couple. When I circled around a minute later, there were no peas to be found.

I said, “Didn’t you have peas here a minute ago?”

“Yes,” came the speedy reply. “And a man just bought me out. But I have more in the cooler … if I’d told him I had more, he might have cleaned me out completely!”

Grabbing what I needed, I moved on. I had plenty of peaches and cantaloupe, so I passed those places by.

I was about to leave when I noticed a few small baskets of figs nestled among more prolific produce at a bustling stand toward the back of the market.

It seems a little early for figs, but the fig yield has been sparse for the past few years and maybe my timing is off. I heard myself sigh figs at precisely the moment a woman behind me did the same.

I moved quickly to the stand with mixed emotions.

First, I associate figs with the end of summer and I’m not nearly ready for that. But, also, I didn’t really grow up with figs; they were not a part of my own family’s eating heritage and I was late to that club. It was while working with a theatre in Montgomery that some of the locals and transient actors began to awaken me to the charm of the fig crop. It was there that figs became another of my harbingers of the stages of the summer fruits.

Often, when the figs disappear, so has the summer.

I debated whether I was ready to invite portentous figs into my seasonal kitchen. The woman behind me made her move and so I quickly maneuvered to the front of the line. I pointed to the basket I wanted and said, “Aren’t they early?”

Apparently, they are, but they might also have a longer growing season than in the past several years, so my lament for the end of summer might be delayed for several weeks.

Somewhere in chef Jeremiah Tower’s very entertaining memoir, California Dish (2004), he repeats the snarky comment made by a French chef about the cuisine of Alice Waters, the 1970s pioneer in the California Cuisine movement: “That’s not cooking; that’s shopping!”

I love that quote and am wholeheartedly among the growing movement of people who know that the freshness and quality of the ingredients we use are just as important as what we do with and to those ingredients. This used to be the position of tree-huggers and the fringe but the crowds flocking to local farmers markets are evidence that the philosophy is now mainstream and still growing.

It’s not food snobbery. It’s just learning something anew that previous generations understood and accepted as a way of life.

My Grandmother Harbison always had good food warming in the oven and usually there was a pot of fresh-made vegetable soup on the stove. In addition to that, there was always a fresh cake of cornbread in an iron skillet and more often than not a cake or dessert of some kind. She continued cooking even when her health began to limit what she was able to do.

I always knew that whenever I dropped by my grandmother’s house one of the first questions would be “Are you hungry?” Even if I wasn’t particularly hungry, Grandmother would lay out a table full of food within minutes. And I would always find an appetite for it.

It used to amuse me when I would drop by and Grandmother would have plenty of food in the house but would say “Would you rather go pick up some ‘tacahs’?” referring to a Taco Bell down on the highway.

“No — I’d rather eat a bowl of your vegetable soup,” I’d reply. Sometimes she would insist on riding with me to pick up a bag of tacos anyway – neither she nor my grandfather drove. I realized that while fast food was nothing novel and special for me and I was craving home cooking – real food, my grandmother had been cooking for family and crowds for most of her life and rarely went to a restaurant or hamburger stand. It was an enjoyable change for her to have a fast food taco now and then.

Today I came in from work and surveyed my supply of food. It’s a hot and rainy day and I was in the mood for a salad. The first thing I spotted was a Cherokee Purple tomato on the kitchen counter that I picked up at Greene Street Farmers Market at Nativity a few days ago (www.greenestreetmarket.com). It was getting a little ripe and I needed to eat it before I traveled for the 4th of July holiday in a day or two.

My friend Judy Prince from Paint Rock Valley told me a few years ago that she planned to “bring back” Cherokee Purples, an heirloom tomato with a bruise of purple skin and a deep burgundy fleshy meat. Based on recent observations at a variety of farmers markets, I have to say to Judy, “Mission accomplished.” Practically everybody with tomatoes at the market had some Cherokee Purples in the mix.

With my Cherokee Purple as the centerpiece, I pulled out some lush green leaf lettuce from the local J. Sparks Hydroponic Farm (www.jsparksfarms.com), washed and tore it, and made a crisp bed of lettuce. I chopped up a purple bell pepper from the organic RiverFly Farms in Paint Rock Valley (www.lifeasweknowhim.com) and a pretty baby onion from another Greene Street stand. Fresh basil and mint came from pots in my back yard and I crumbled the “Garden Blend” of goat cheese from Humble Heart (www.humbleheartfarms.com) on top of the mix. I finished it off with salt and pepper and drizzles of a good olive oil and balsamic vinegar that I have on-hand. 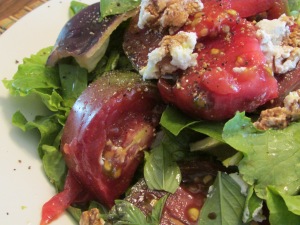 It was a lordly summer lunch made even more special by the fact that I know each purveyor (except for the oil and vinegar) by name and had bought all of the ingredients directly from the farmers who grew them. As we “re-learn” the benefits and pleasures of fresh local food, we are making a connection with generations before us who took fresh food from the area for granted. How lucky they were, if they only knew.

A few weeks ago, on Father’s Day weekend, my family decided to forego the hassle of a restaurant and eat a farm-fresh Sunday dinner at my parents’ house as a joint celebration of Father’s Day and my mother’s birthday a couple of days later. On Saturday morning, I went to my personal favorite farmers market, Pepper Place Market in Birmingham (www.pepperplacemarket.com), and surveyed the prospects among the booths.

Pepper Place sprawls along the site of an old Dr. Pepper plant that has been transformed into a design center and dining district. Pepper Place Market takes over the exteriors on Saturdays from 7:00 a.m. to noon and has over 100 vendors in three distinct areas. The Market started in 2000 and has gotten a little large and crowded but I find that if you get there by 8:00 a.m. it’s easier to navigate and there are fewer baby carriages to maneuver around. I came away with tomatoes, okra, corn on the cob, and lady peas and made the next day’s meal of creamed corn, fried okra, and the lady peas cooked in chicken broth. Mother cooked a pork roast and cornbread. Once again, it was an exceptional meal which mostly bypassed the middle step by buying directly from the growers.

Sometimes, at the various farmers markets I attend, I look at the people around me and wonder if all the trendy people are an indication that the slow food and farm-to-table movements are merely a current and growing trend; I wonder if we will all go back to opting for “convenience.”

I think not. I think that as we have begun to re-learn food and as more and more local chefs and restaurateurs serve local food from local purveyors that is superior in quality, we will opt for the smart way and support the movement as we see how it benefits all of us in so many ways. Unless I am actually in California, I vow to never again eat another grocery store tomato from California that was chemically treated and travelled across the continent while infinitely better tomatoes were on a vine just steps away. 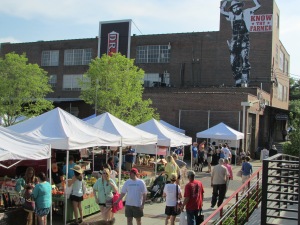 American Farmland Trust (www.farmland.org), the people responsible for those “No Farms No Food” bumper stickers, is doing good things in support of local farms. Their website includes great information about local farmers markets nationwide. Visit one soon if it’s not already a part of your routine.