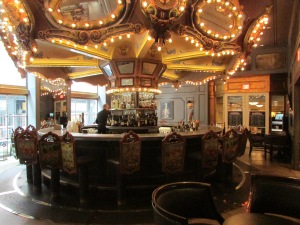 When I drive to New Orleans from Alabama I have the habit of tuning my car radio to 90.7 somewhere between Laurel and Hattiesburg, Mississippi. I initially meet with static but somewhere between Hattiesburg and Lake Pontchartrain the static resolves itself into WWOZ-FM (www.wwoz.org), the great public radio station broadcasting from the French Market, and that’s what I listen to in my car and in my hotel room throughout my New Orleans stay.

At the top of every two hours (on the uneven numbers) the “Livewire” music calendar presents an exhaustive list of all of the live music in the clubs and performance venues throughout the city on that particular day. It was on the “Livewire” calendar many years ago during a drive into town that I learned about an authentic jazz funeral that was going to happen during my stay. I began immediately to make plans to be in that second line of the funeral for a veteran New Orleans drummer and the next day I attended the first real jazz funeral of my life.

I was in New Orleans this past weekend to deliver a paper at an American Literature Association symposium at the Hotel Monteleone in the French Quarter. While there, I got an abundant dose of the variety of music available from the diverse volunteer deejays gracing the WWOZ airwaves. The collective musical knowledge of the WWOZ deejays is itself a thing of wonder. One deejay was a new father and all of his music for two hours contained the word “baby” in the title or refrain; early on Saturday morning, all of the music dealt with addiction, drugs, or alcohol but was leavened with songs of redemption and atonement.

Of course you can get a live web feed of WWOZ from anywhere in the world nowadays but there’s something about hearing it on the radio and actually being below the Salt Line.

New Orleans has always had the reputation of being a haunted city but that has not been a huge factor in my New Orleans. This trip was a little different, though, and more heavily influenced by my recent landmark birthday and other family events than I thought it would be. Perceptions are influenced by what’s happening in one’s life and it seemed that this particular trip – while mostly work-oriented and still a lot of fun — was a more elegiac experience of New Orleans than usual. There were constant reminders of experiences and people past; passing comments and glimpses were suddenly fraught with meaning. 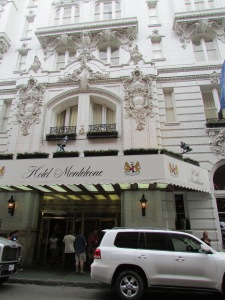 On the first night, after checking into my room at the Monteleone and picking up my credentials for the symposium, I dashed a few blocks to the Napoleon House for dinner. The Napoleon House (www.napoleonhouse.com) contains decades of memories for me and centuries of memories for its city. The dusk and carriages outside, the patinated walls and classical music of the old house, and the blended patter — of locals and tourists, young romantic couples and aging habitues, the sometimes surly and always knowledgeable waiters and bartenders in their tuxedo shirts and bowties, a rowdy group of guys in town for a bachelor party — all melded into a series of personal memories of people and events and time spent in a city that I never get tired of visiting.

Leaving the Napoleon House, I walked uptown into the Central Business District and then back downriver on Decatur to Marigny and the music of Frenchmen Street. After an evening spent walking and reviewing my paper to be presented I found myself sitting in the Carousel Lounge at the Monteleone (www.hotelmonteleone.com). I sat looking out a window at Royal Street – watching the passing parade – while also watching NFL football (Steelers vs. the evil Patriots) and the revolving bar.

On separate occasions that night, and in separate places, I overheard snatches of conversation by symposium attendees and others recounting stories about the likes of Faulkner, Capote, Hemingway, Welty, and Williams and their time in the city. They are all long gone. But all of them spent time in the Monteleone and at the Carousel, as did so many others over the years. Those stories and that history are among the reasons the Monteleone and the Carousel are popular tourist attractions and always so crowded.

One day — in the not that distant future, probably (it’s all relative) – I will be gone too and my trips to New Orleans will be over. But the revelers will still come and the Quarter will be full of frivolity and the Carousel Bar will still rotate and the gracious and raucous life of the Quarter and the city will endure whether I’m there to share it or not. More stories will be told; more memories will be formed; more ghosts will come and go.

That’s the kind of trip New Orleans was for me this time.

Each morning I got up early and wandered down to Jackson Square and St. Louis Cathedral for some quiet time before the symposium sessions began. I have been going to that cathedral early in the morning for years but this time I found myself lighting candles for family and friends in trouble and in need. I’m not a Catholic but it couldn’t hurt and right now we all need all the help we can get. 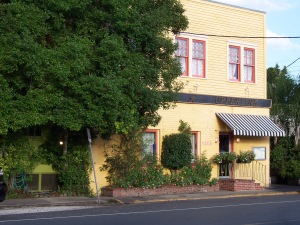 On my final night I went uptown to a favorite restaurant, Upperline (www.upperline.com). As always, JoAnn Clevenger, the restaurateur, was presiding over the restaurant like the seasoned pro she is, making everyone feel welcome and special from the moment they walked in the door. As she dropped by the table we discussed the fact that it had been a long three and a half years since my last visit. JoAnn explained the genesis of the “Dorothy Parker on the Bayou” cocktail she created with Dorothy Parker gin, various liqueurs, and orange bitters. “Dorothy Parker” is garnished with three Red Hots.  Fittingly …

After dinner I returned to the hotel. I had a long drive the next day but I walked back down Royal Street and listened to a lovely duo of street performers on the corner of Royal and St. Louis. Tanya and Dorise (www.tanyandorise.com) have attracted a following in the Quarter with their violin and guitar renditions of an amazing array of music. Although they play a little bit of everything, when I last saw them – close to 11:00 p.m. – they were playing contemplative and thoughtful songs like Leonard Cohen’s “Hallelujah” and the Pachelbel “Canon.”  When Tanya and Dorise broke into Nirvana’s “Smells like Teen Spirit”  the gathering crowd erupted. The mood was shifting again but then a brass band appeared up the street, leading a wedding party and its second line back to the Monteleone. As the second line passed, I took it as a cue to trail behind and return to the hotel myself with the sounds of Tanya and Dorise floating in the sultry air behind me. The brass band dispersed outside the hotel as the last of the wedding party disappeared into the lobby. 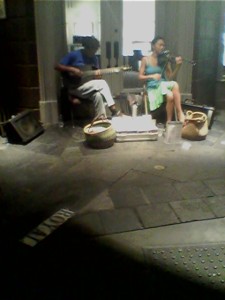 I left Sunday morning to drive back to Alabama. WWOZ was playing gospel as I approached the lake. Past the north shore, another WWOZ deejay was playing a show about “letters” with early bluegrass and country music like the Carter Family, Hank Williams, Ralph Stanley, and the Louvin Brothers. In her second hour she interviewed a local band about a square dance they were playing on Monday night. Just before Hattiesburg, the intermittent signal had disappeared completely and the deejay, “Hazel the Delta Rambler,” was gone.

She had become another ghost of New Orleans.

2 thoughts on “Ghosts of New Orleans”