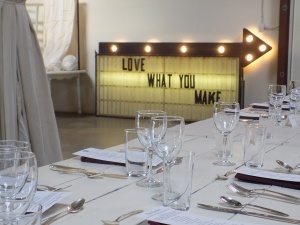 I’ve stopped trying to rank the meals I’ve had at the Friends of the Café dinners at the Alabama Chanin factory in Florence. When I think a Factory meal can’t be topped, I travel over to the Shoals and have another meal that once again makes me appreciate food in a new way.

I have missed a few of the Factory events but I think I have now attended six or seven starting with an amazing dinner featuring the food creations of chef Vivian Howard in July 2014.

The Factory’s own executive chef, Zachariah Chanin, and his staff created a truly memorable Spring Harvest dinner in May 2016 that blew me away with its exquisite simplicity and low-key elegance. That meal was not long after the legendary Frank Stitt and South Carolina pitmaster Rodney Scott teamed up for an amazing spread featuring Scott’s savory whole hog and a slough of accompanying sides by Stitt and his crew.

So it was with great excitement and anticipation that my friend Anne and I trekked back to the Shoals for a late-summer dinner featuring chef Adam Evans, a Shoals native, and benefiting Southern Foodways Alliance. Evans is transitioning now after several years in Atlanta with gigs at The Optimist and Brezza Cucina; exciting rumors were circulating at the dinner about where he may launch his next culinary venture and, if they are true, I may have many more opportunities to sample his exciting food.

I have written in more than one essay about how Natalie Chanin promotes community in her work and design and in her outreaches such as the Factory dinners. At Zach’s dinner in May we sat across from a charming couple from Indianapolis and at the Evans dinner our dining partners were another great couple from Tulsa.

Chef Adam’s meal was personal and full of surprises, telling his story of working in restaurants in many locales with the feast “beginning and ending right here in Alabama” as the menu note stated. Passed around hors d’oeuvres included grilled oysters and lemon butter, pork belly and watermelon, lobster roll bites, and tomato and bacon tea cake sandwiches. The big surprise of the hors d’oeuvres was a chicken stew soup dumpling which demanded to be downed in one satisfying bite. The savory dumpling had a filling of actual chicken soup that was a surprise and a unique treat. There were wine pairings with every course.

When the diners were seated, we were served a beautiful garden salad harvested from the garden of “Henry H.” – the chef’s late grandfather. Henry’s garden is still maintained by chef Adam’s father. The chef’s story of the garden was as moving as the salad was good.

The surprises continued with a second course of a seafood gumbo with a lot of heat. In lieu of the serving of rice that usually accompanies gumbo, this gumbo had a dollop of potato salad on top. It might not sound good but everybody was raving about the gumbo – potato salad combination. John T. Edge of the Southern Foodways Alliance was among the diners and asked for the chef to come out and explain the potato salad with the gumbo. It turns out Evans picked it up from the father of a friend when he was working in New Orleans. He said the man made a great gumbo and always put potato salad on top. It’s a touch I plan to remember and steal. Indeed, I think Chef Evans managed to introduce a southern food way that surprised even John T. Edge.

Finally, a muscadine and fig crisp was served for dessert, the staff was introduced, and fond partings were exchanged with the community that had assembled for the evening in the very special place that Alabama Chanin has built in Florence in the Alabama Shoals.

At some point during the evening, the people at our table were discussing careers and I said, “I’m a university professor but I’d rather be a ‘lifestyle guru’. I didn’t realize that was an option when I was coming up.”

If I had known that “lifestyle guru” would be a thing that people might make a living at, and if I had managed to become one, I’m sure I would be proselytizing for the Alabama Chanin aesthetic and, after the meal of a couple of weeks ago, for the homegrown and brilliant culinary aesthetic of Adam Evans.

As always, I can’t wait for the next Friends of the Café dinner in October.