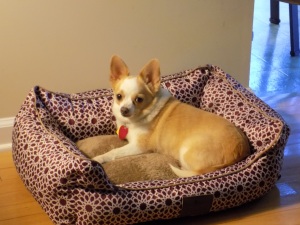 I have been accused of a lack of sentimentality. Constant moving around when I was growing up, I think, forced me to develop a hard shell. As the perennial “new kid,” I did not want to appear vulnerable.

Over time I have softened and am less hesitant to show my feelings.

My mother’s dog, Clover, died on April 3 and my heart is broken.

Growing up, my family always had dogs and the occasional cat. Mother and Dad’s last dogs, Sheba and Picasso, died when they were still living in Tuscaloosa and, by the time my parents moved back to Birmingham, Dad’s health was precarious; even though Mother wanted to get a dog, Dad’s health issues seemed to preclude it. When Dad passed away in spring 2016, Mother decided to get a companion and rescued a 5-year-old chihuahua with medium length hair.

The chihuahua had come into the shelter with a group of small dogs that we were told the owner could no longer take care of and the shelter had dubbed her “Great Aunt.” My mother renamed her “Clover.”

From the first day at the house, Clover was a sweet and considerate dog. At first, she seemed a little timid and was clearly afraid she might do something wrong in this new place where people were trying so hard to make her feel welcome. I asked Mother, “Have you ever heard her bark?” We weren’t sure if she even barked and we didn’t hear her bark for the first several days.

It didn’t take long for Clover to acclimate and eventually she started to bark. She had no interest in toys and, because she didn’t have many teeth, treats had to be carefully chosen. Her devotion to Mother was unwavering and she would sleep on the chair next to Mother’s bed, watching her through the night. If Mother got up to go to the bathroom, Clover would step inside to see that she was alright and then would go lie outside the door until Mother came back to bed.

She would never walk in front of people so she was never underfoot; we were amused by her nimble maneuvering to always be a step or two behind us. If someone came near Mother that Clover wasn’t sure of, Clover would subtly and strategically position herself between that person and Mother. She was basically toothless and not big enough to do much damage, probably, but she didn’t know that.

Mother would take Clover to the cemetery with her and Clover would eagerly jump out of the car and then step to the side until Mother emerged. Then, she would walk quietly behind Mother to Dad’s grave. While Mother visited, Clover liked to lie on Dad’s foot marker. 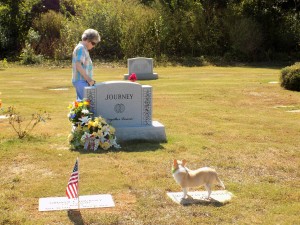 When I spent the night at Mother’s house, I would hear Clover during the night walking to my bedroom door to check on me. If I sat up she would eagerly run to the side of the bed to be petted for a moment and then she would run back through the house to keep watch over Mother.

She loved to go for a ride in the car. If you said, “Clover, let’s go for a ride ,” she would bounce up and start dancing around; she couldn’t wait to jump in the car and go for a ride. She had a fascination with drive-thrus at restaurants and ATM drive-thrus. She would watch with curious interest as the cashier passed the food and exchanged money out the window and she loved the beeping sounds the ATMs made.

Clover had a preternatural love of belly rubs. Her eyes would roll back in her head ecstatically and after a good belly rub she would go to her bed and wallow in the after-effect.

Clover had a prodigious tongue. She could keep it contained inside her mouth if she wanted to but she rarely wanted to.

I credit Clover with helping Mother to get through the first year after Dad’s death. She brought some happiness and an element of joy back into a sad house. She helped me a lot, too, in that first year. When I would arrive at the house for a visit, I would ring the doorbell. The doorbell drove Clover crazy; she would stop whatever she was doing and start barking toward the door. But when I walked in the barking would stop and Clover’s entire body would shake as she would prance and dance around me and anticipate the first of many weekend belly rubs.

On an afternoon almost exactly a year after Dad’s death, Clover slowed down suddenly and without warning. She was lethargic, lacked energy. Mother was concerned and I joked “Oh, she’s been one of us for a year now; she’s just taking on the family trait – depression.”

But Clover wasn’t herself. When we would go for a ride in the car, she would wait to be picked up to get in the car. She wouldn’t jump out eagerly when we got to our destination.

I left her with Mother on Sunday afternoon, assuring Mother that Clover would snap out of whatever was wrong. After all, she had been given a clean bill of health just a few weeks earlier.

On Monday, Mother called me that Clover couldn’t walk and I rushed back to Birmingham to take her to the vet, Dr. Nikki Williams, who did several tests, found some blood irregularities, and kept Clover for a few days.

By the next weekend, Clover was back home and although she was clearly recovering she was not 100%. Still, she was back to as many of her old ways as she could muster and when I left the house on Sunday I felt good about her prognosis.

The next day, Mother called me and Clover had collapsed and had some sort of seizure. As soon as I could leave work, I rushed back to Birmingham but Mother and my sister-in-law had already gotten Clover back to Dr. Williams.

By Friday, Dr. Williams sent a very sick Clover to spend the weekend with us, thinking that a “couple of days of loving” with her family might help. Despite Clover’s valiant attempts, she seemed to be deteriorating rather than progressing and by Sunday afternoon Dr. Williams picked her up to care for her. On Monday, the vet informed Mother that there seemed to be no chance for improvement and Clover died in her vet’s arms on Monday night.

I may be being overly sentimental here, but it seemed in some ways that Clover was a bit of a guardian angel helping Mother get through the first year of losing Dad.  After that first rough year of comfort and love, her little body gave out on her.

She was irreplaceable. At the risk of cliché, I have no shame in saying our hearts are broken.