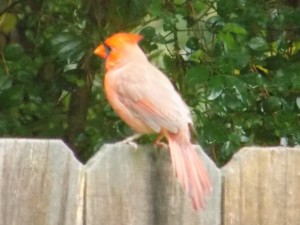 The remnants of tropical storm Beta moved through my part of the world recently, with steady rains most of the day. It intrigues me how often the weather seems to take its cues from the calendar and, on these first days after the official start of Autumn, the weather suddenly has the unmistakable signs of the new season.

The next morning, I awoke to the storm’s final mists. Looking out a back window, down the mountain into the forest beyond the fence, fog was creeping slowly through the trees from the direction of Shades Creek in the valley.

Two pairs of cardinals were perched on the fence – two females in their prim ashes of roses feathers and two males, pluming themselves in bold Vatican red. They soon scattered, moving back and forth from the forest to the yard to the fence and back again.

One pair of cardinals moved to the branches of the stately rose of Sharon which seems to have finished its flowering for the year. My eyes were drawn upward by the steady hum of a hummingbird in the top of the rose of Sharon, searching, I suppose, for a few more drops of nectar from the fading purple blooms before that tree bids farewell to 2020 (something we’re all eager to do, I suspect).

Later, a couple of hummingbirds began to jockey for position at the feeder by the kitchen window; mourning doves converged on birdseed at the back fence. Soon the mist was gone, the fog had lifted, birds and bird song filled the sunny yard and the woods beyond, and Mother’s curious dog Lulu kept watch over it all.

The flower garden is having its final hurrah, and butterflies flew among the red roses, yellow lantana, and purple heart. One multi-colored butterfly kept coming back and catching my eye. I realized that it had a damaged wing, but that could not detract from its graceful ballet among the blooms. Another butterfly, almost exactly the color of the lantana blooms, was almost missed – blending in perfectly with the flowers.

That morning I forgot, for a brief while, all of the bad things that are going on in the world, the scary fascist running for re-election, and my dread of cold weather and short days. At the beginning of Spring 2020, as the gravity of this pandemic was taking hold, I wrote an essay called “The Panic of Cardinals” about a pair of cardinals trying to escape from their entrapment on the top floor of the conference center in Louisville.

I’ve decided to interpret my early Autumn sighting of four cardinals sitting on the back fence – and the glorious day they ushered in – as the promise of brighter and more positive days to come.