WARNING: This essay deals with what has become known as a “first-world” problem, so be aware of that as you read. I am very aware of how privileged I am to be stressed about lost books.

I bought a house in the spring. I like it, I like the location, and I know that I will be happy there. Eventually. I moved in on June 1, unpacked, and had the interior arranged the way I wanted it by Independence Day. On July 20, I came downstairs to find water leaking from upstairs onto my kitchen counters; the plumbers and I discovered a well-disguised leak in an upstairs guest bath that had been missed in the home inspection.

Extensive, mainly hidden, damage was found that resulted in my having to get all new floors upstairs, new stairs, and new ceilings downstairs. I used the opportunity to make some upgrades. The house, upon completion, will be much better than it was when I moved in.

The contractors finished their work a few days ago and I spent Saturday putting my stuff back in place. The books in the upstairs bookshelves had been packed away by the construction crew and left in the garage during the construction.

I am a little OCD about my books. They are always placed in alphabetical order by author or, in the case of biography, subject. Even in my most impoverished days in grad school, living in a squalid four-plex in the student ghetto on 13th Avenue, I always kept my books carefully organized. When a career in professional theatre moved me frequently around the country, I always moved with a trailer filled with my books and shelves to be assembled on arrival. Often, the books, my clothes, and some pots and pans were about all I had to move.

When the work on the house was completed, the construction crew moved my books back up to the bedrooms where my bookshelves waited. I hate moving, but I take pleasure in stocking my bookshelves. On Saturday, as I unpacked and alphabetized my books, I discovered that letters “A” through “F” and part of “G” are missing. I searched everywhere in the house and garage where boxes of books might possibly disappear with no luck. I contacted the contractor and project manager to let them know. The contractor got very defensive and assured me that he didn’t take my books; I never thought he “took” them, but I have a hunch they might have been accidentally hauled out with construction debris. It seems far-fetched, but no other explanation comes to mind.

The contractor washed his hands of the problem, but the project manager says he will have the dumpsters checked at the company site (a horrifying prospect). Somehow, I don’t have a lot of confidence in the success of the dumpster dive.

Over the years, I have occasionally weeded out some books. I donated 250 titles to the library on this last move. Another 150 play scripts and theatre books were donated to my old academic department when I retired. By my rough estimate, another 180+ books have now been potentially lost in this latest development. I have been trying to do a mental inventory of some of the books that have been lost. Here is a by no means complete (and alphabetized) list of authors I have remembered so far:

Also, critical studies of film director Robert Altman. Dozens of issues of The Black Warrior Review, a literary magazine. Photographic volumes on Birmingham and Alabama history. Personally inscribed and signed first editions. Books I bought in high school. Books I bought a couple of months ago.

As I keep listing, I get increasingly out of sorts, but you get the idea. Other readers will understand. Fortunately, my collections of cook books, books on architecture, gardening books, and art books are housed in other parts of the house so those collections remain intact.

I have been asked on more than one occasion if I have read every book on my shelves. Yes, I have. In fact, a book didn’t go on the shelf until I had finished reading it.

I have been asked why I keep the books if I’ve already read them. If you ask a question like that, I’m afraid you will never understand. Suffice it to say, some books I re-read. Some books I use for reference. Some books I just want to have around.

An example: I read The Great Gatsby every year on the Summer Solstice. A decades-long ritual. Once a copy of Gatsby is worn out, I replace it with a new edition, but keep the worn-out copies on the shelf. It is interesting to see my notations in the text from readings past; I mark my life by the passages that once stood out to me and now mean less, and by the passages that I have never particularly noted before which suddenly take on a significance with age.

In 1990, in a home robbery, my entire sizable collection of vinyl records was stolen, along with my stereo system. That was hard, but I shifted to CDs and moved on. This book loss seems more visceral, somehow, and harder to wrap my head around. My book collection from the middle of “G” to “Z” is intact, but one whole bookcase is completely empty.

Almost empty, I should say. I just finished reviewing a book and had not placed it on the shelves yet. The author’s last name starts with the letter B.

James Braziel, it’s all up to you, man. You’re standing in for a host of good authors. 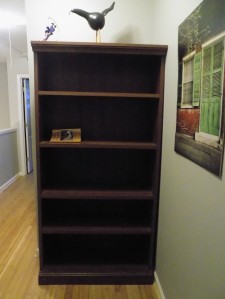